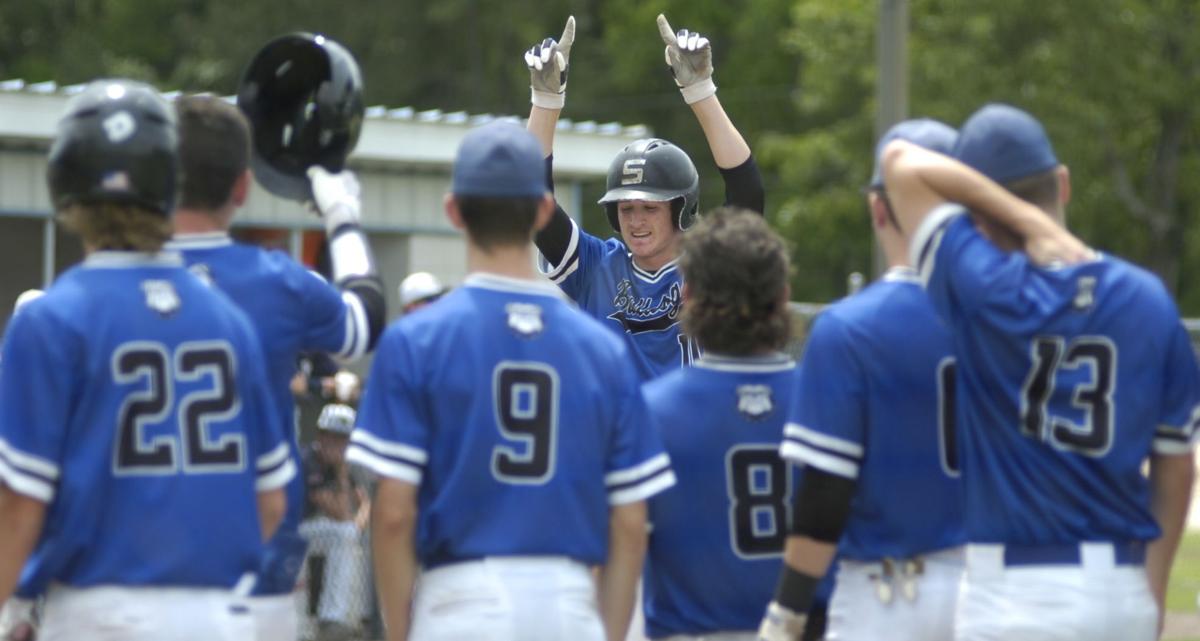 Springfield’s Blake Lobell celebrates a solo home run with his team at home plate in the top of the first inning of Game 2 against D’Arbonne Woods Charter Saturday. 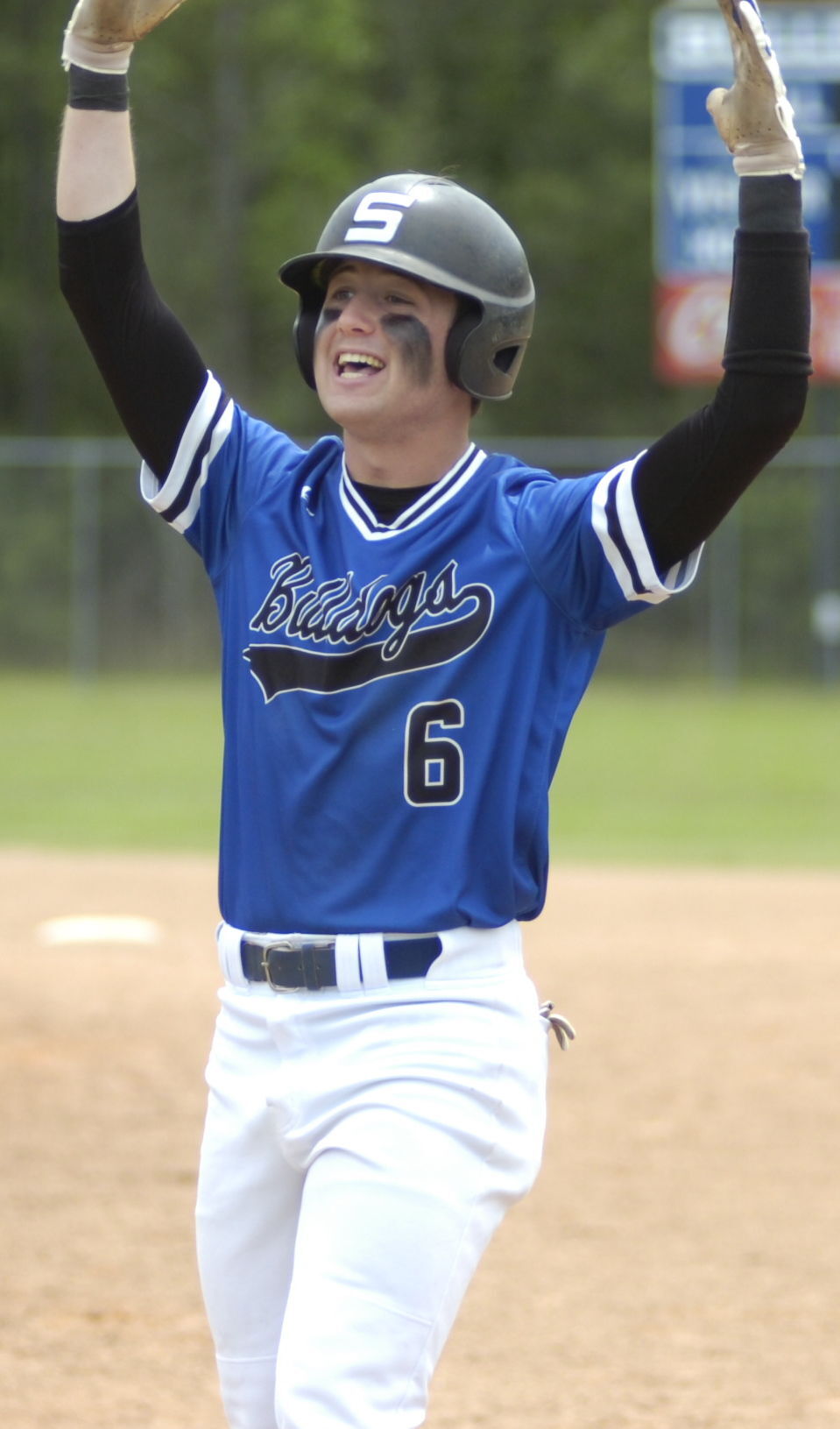 Senior shortstop Bryce Vittorio celebrates at first after tying the game on a single up the middle with two outs left in the game. 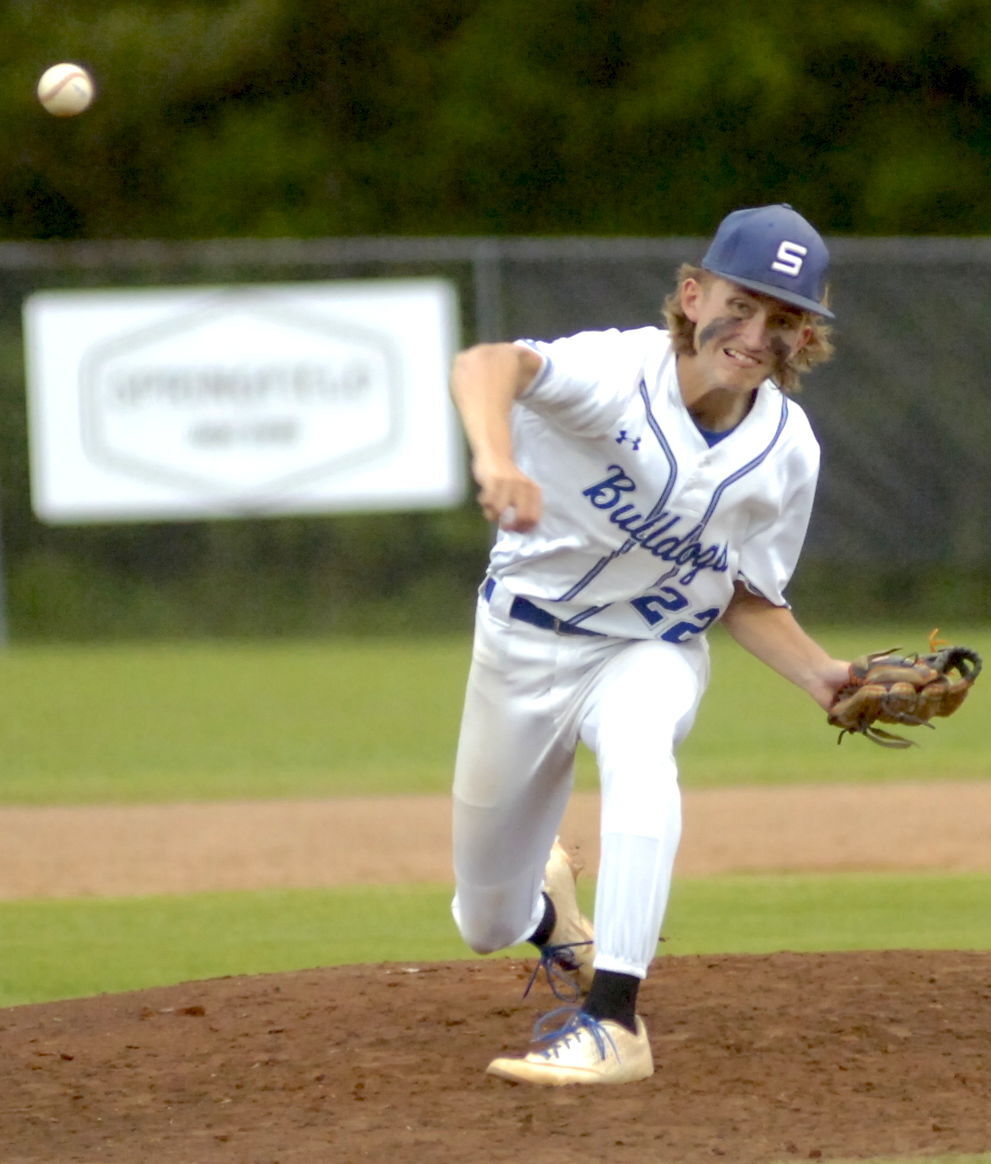 Springfield’s Jayden Teague is dominant in series opener against D’Arbonne Woods Charter Friday. He allowed one run on two hits through seven innings.

Springfield’s Blake Lobell celebrates a solo home run with his team at home plate in the top of the first inning of Game 2 against D’Arbonne Woods Charter Saturday.

Senior shortstop Bryce Vittorio celebrates at first after tying the game on a single up the middle with two outs left in the game.

Springfield’s Jayden Teague is dominant in series opener against D’Arbonne Woods Charter Friday. He allowed one run on two hits through seven innings.

SPRINGFIELD — Springfield baseball advanced to the third round of postseason play for the first time in school history behind fiery performances from a talented pitching staff and veteran leaders.

Through 14 innings, D’Arbonne tallied seven hits as sophomore Jayden Teague was dominant in Game 1. Blake Lobell pitched seven strong innings in Game 2 to help lead his team to the sweep.

After throwing multiple no-hitters and a perfect game this season, Teague allowed two hits through seven innings, striking out five along the way. A solo home run in the second inning of Friday’s game was D’Arbonne Woods’ lone hit until a single in the top of the seventh.

Despite the dominance, Teague said he struggled to locate the zone, but he was able to compete as his defense played well behind him.

“Tonight was his middle 33 percent, and he competed. I was proud to see that from him. He didn’t have his best stuff, compared to his no-hitters that he’s been throwing, but he did what we needed him to do.”

Having an “off day” for one of the top pitchers in on of the top districts in Class 2A, his offense gave him run support early.

The Bulldogs recorded back-to-back singles from Bryce Vittorio and Blake Lobell in the bottom of the first before Logan Lobell hit a line drive into center field to bring home both runs, pushing Springfield ahead 2-0 before the Timberwolves’ solo home run.

Two more runs scored in the bottom of the second as Grant Lane crossed the plate on a passed ball and Vittorio scored on the overthrow of the pitcher covering home plate.

With a three-run lead, Teague let his defense work throughout the final five innings.

“I tell our guys from day one, ‘if you pitch and play defense, you can be in any game,’” Blanchard said, happy about his defense’s performance behind their ace.

Springfield added one more run in the bottom of the fourth inning as Lane came home to score for the second time in the game after Logan Lobell was caught in a rundown. The throw to the plate was late as Lane slid around the tag.

Logan Lobell recorded one hit, driving in two runs in the game. Vittorio and Lane each tallied one hit while scoring two runs.

The win put Blake Lobell on the mound for Saturday’s Game 2, leaving Blanchard confident in his No. 2 pitcher.

“I’ll take Blake over almost anybody in 2A,” Blanchard said. “He’s our guy, and we’re going to ride him (Saturday).”

Springfield picked up right where it left off Friday, pushing across one run in the top of the first while playing with confidence as Blake Lobell took the mound for Game 2.

He helped himself in the top of the first inning, blasting a solo home run to left field, giving the Bulldogs a 1-0 lead after two batters.

“I led off the game with a solo home run, so we were jacked up,” Blake Lobell said.

His momentum carried to the pitching as he didn’t allow a base hit until the bottom of the fourth inning when D’Arbonne Woods plated one run on back-to-back singles.

Springfield’s offense struggled after the home run early in the game, waiting to come alive until benches cleared in the bottom of the sixth inning.

Blake Lobell struggled in the inning, hitting one batter and giving up a single to put runners at second and third.

With the throw coming home, the runner and Logan Lobell collided at home plate, causing a reaction from both sides. With tempers flaring, players in both dugouts started to make their way to home plate before the umpires and coaches were able to get things under control.

After the umpires’ meeting at the plate, play resumed with no ejections and D’Arbonne gaining all the momentum after taking a 4-1 lead.

“After everything, it goes back to pitch-and-catch. I tell our guys, ‘just do your job,’” Blanchard said. “If we make a normal relay home, it’s better odds that he’s out and the circus doesn’t start. It was just one of those things where we talk about damage control. One bad inning can lose you a game.”

Blake Lobell struck out the next batter to end the inning, putting the bottom of the order up for the Bulldogs.

After a fly out, Russell Egnew hit a ground ball to short. On the throw to first, the ball sailed into the dugout to put him at second. Ethan Anthony then walked to put Lane at the plate.

He continued his strong hitting in the series, pushing a ground ball through the right side to score Egnew from second and cut the deficit to 4-2.

Bulldog senior, Vittorio, followed Lane. Blanchard said he told Vittorio at the beginning of the season the senior shortstop was the key to the team’s success.

He proved Blanchard right as he pushed the count to 1-1 and drove the third pitch of the at-bat back up the middle to score two runs and tie the game at four.

“They were teaching us to keep the ball on the ground and put it in play,” Vittorio said. “I was trying to drive something through the middle and get at least one runner in so Blake has the other runner. He was playing to the left, and I snuck one through the middle. I got lucky right there.”

Vittorio continued to make an impact in the top of the seventh inning. On the first pitch of Blake Lobell’s at-bat, Vittorio put himself in scoring position by stealing second base.

The Bulldog pitcher then hit a ground ball between first and second base. On the throw to first, Vittorio rounded third base as D’Arbonne Woods’ first baseman was focused on Blake Lobell coming down the base line.

Vittorio said he didn’t think third-base coach Louis Dugas would send him home, but he had to “jump around the catcher” to score.

A late throw to home plate allowed Vittorio to slide in safely, pushing Springfield ahead 5-4.

“Coach Boog did an unbelievable job to send him. Bryce is our best base runner,” Blanchard said. “Those two knew exactly what the other was thinking.”

With his ankle wrapped, he dominated the final three batters. He struck out the side before throwing his glove in the air to celebrate sending his team to their first quarterfinal appearance in program history, a “great feeling” Vittorio said.

UP NEXT: Springfield takes on No. 3 Mangham (21-4) on the road. Times were not yet determined Monday afternoon.