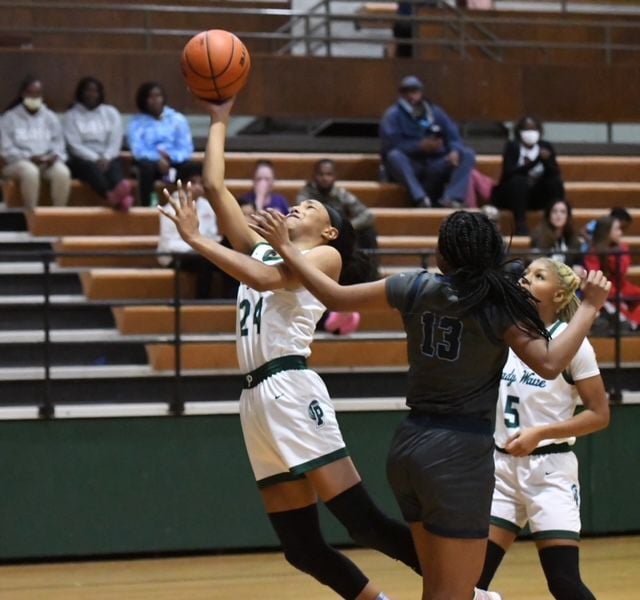 Ponchatoula's Jaylee Womack connects with a shot while getting fouled against Northshore Thursday night. Womack and the Lady Wave knocked off No. 6 Northshore 87-45. 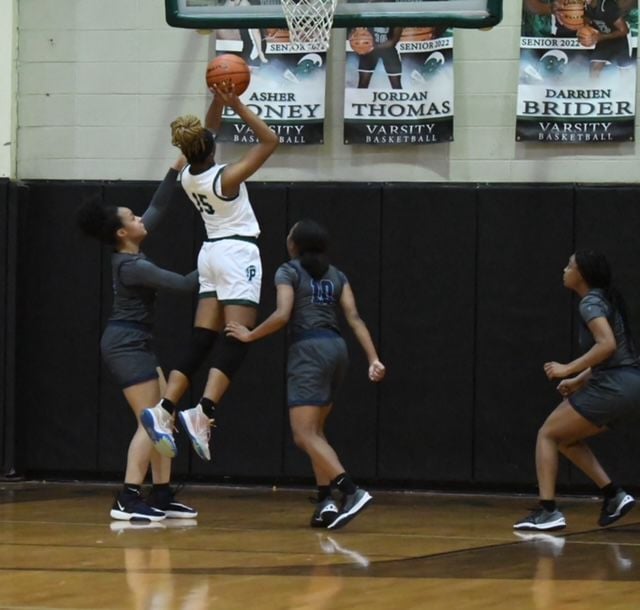 Ponchatoula's Jaylee Womack connects with a shot while getting fouled against Northshore Thursday night. Womack and the Lady Wave knocked off No. 6 Northshore 87-45.

The Class 5A No. 3 Lady Wave (19-2, 4-0) continued to assert their dominance throughout the state. Ponchatoula’s rececnt success has been without two of its starters – Jada Clark and Presley Walls.

“We’re learning, and we’re growing. Those two losses were valuable losses that we really needed,” Ponchatoula head coach Patricia Landaiche said. “We saw some stuff that we saw late in the year last year in the game we lost, and we managed to figure it out as a team and overcame that.”

Northshore (16-6, 4-1) didn’t make it easy throughout the first eight minutes, however.

In a playoff atmosphere, Ponchatoula got ahead on its second possession. Jaylee Womack knocked down a corner three to start out hot shooting for the Lady Wave.

Northshore was able to take go on a 6-0 run before Ponchatoula got on the board again. After nearly five minutes without scoring, Taylor Jackson got Ponchatoula back on the board, cutting the deficit to 6-5.

For the remaining three minutes, both sides went back-and-forth as Northshore was able to stay on the board with extra possessions, grabbing three offensive rebounds for second-chance opportunities.

Northshore was able to break through Ponchatoula’s press the first eight minutes, finding easy shots at the rim, while also knocking down two 3-pointers.

Abby Faust was able to give Ponchatoula a 13-12 lead in the final moments on a jump shot, however, giving the Lady Wave a lead they held going into the second quarter. Northshore never regained a lead in the final 24 minutes.

“I figured I had more personnel that we could wear them down and eventually get a lead on them,” Landaiche said. “I told (my team), ‘(Northshore) was going to come out punching at the beginning of the game, throwing a 1-2 punch trying to knock us out.’ We were able to get a lead at the end of the first and stayed with it.”

Opening the second quarter, Womack knocked down a shot and the press defense forced a turnover, leading to another Womack score. After two Ponchatoula possessions, the Lady Wave led 17-12 less than 30 seconds into the second quarter.

The Lady Wave press changed things up in the press, trapping more than in the first quarter.

“We did more pressure,” Landaiche said on the adjustments made to the press in the second quarter. “Sometimes they get in and want to go for that steal off the first trap instead of playing the defense that they’re supposed to and not let the ball hit the middle. So they got beat a couple times, but once we corrected that, we were able to keep everything in front of us.”

Ponchatoula pushed the press, causing problems for Northshore as the Lady Wave lead ballooned to 19-12 before the Panthers were back on the board with another 3-pointer.

Northshore called a timeout after a Jackson shot fell with 4:15 left in the second quarter. Jackson finished with 23 points, five rebounds and three steals.

The Panthers then called another timeout at 1:58, but Ponchatoula’s lead once again began to swell between the two stoppages to 25-15.

Seven points from Jackson and two from Womack and Libby Thompson in the final two minutes gave Ponchatoula a 36-18 lead at halftime.

Womack finished with team-high in points (30) and steals (5). She also grabbed six rebounds. Thompson capped off the night with a double-double. She scored 16 points, grabbed 10 rebounds and went 4-for-9 from the 3-point line.

The press with Womack at the top continued to give Northshore fits throughout the second half as the Lady Wave started to knock down shots from the outside and continued to find success at the rim off turnovers.

Holding a 66-31 lead into the fourth quarter, Ponchatoula outscored Northshore 15-6 in the final eight minutes as the reserves entered the game.

“I was really glad (Nortshore head coach Tory Hearn) was pressing us at the end of the game because that was freshmen and sophomores (in the game),” Landaiche said. “I was excited that (Hearn) pressured because they handled it.”