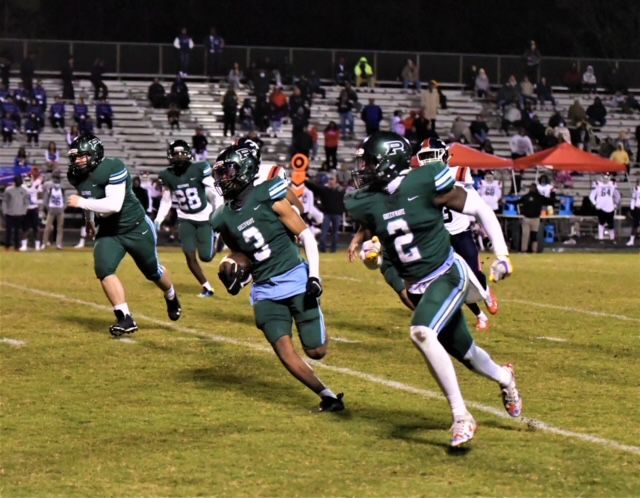 Ponchatoula's Elijah Winters (3) returns a punt for a touchdown in Friday's win over John Eret. 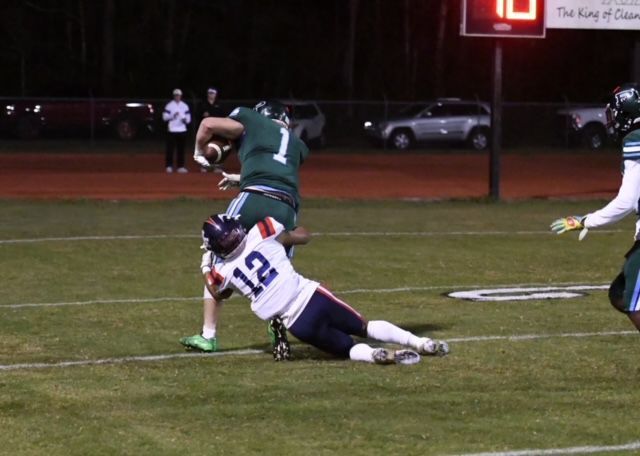 Braydon Johnson carries John Eret's Eian Edwards into the end zone during an interception returned for a toudhown Friday. 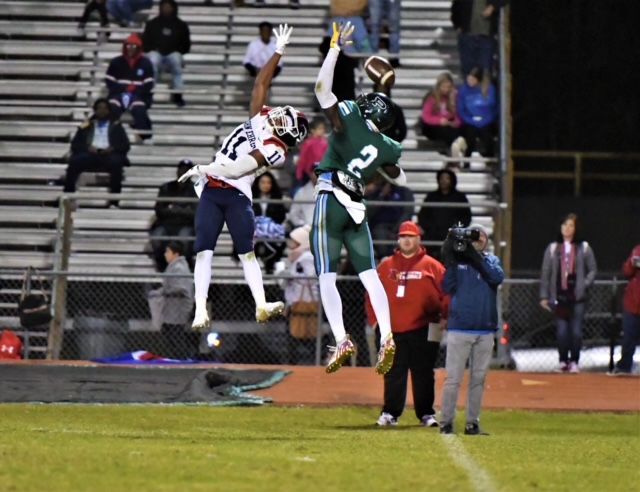 Jacoby Mathews (2) bats away a pass thrown at him Friday night. Mathews came up with an interception late in the game to seal the win as the Green Wave advance to the quarterfinals of the playoffs.

Ponchatoula's Elijah Winters (3) returns a punt for a touchdown in Friday's win over John Eret.

Braydon Johnson carries John Eret's Eian Edwards into the end zone during an interception returned for a toudhown Friday.

Jacoby Mathews (2) bats away a pass thrown at him Friday night. Mathews came up with an interception late in the game to seal the win as the Green Wave advance to the quarterfinals of the playoffs.

No. 3 seed Ponchatoula’s run to the Dome took another step Friday night as the Green Wave rolled through No. 14 John Ehret, 50-7.

A game that started off slow for Ponchatoula ended up being a blowout behind a big interception that sparked some momentum and a dominant performance on defense.

Taking the opening kickoff, Ponchatoula had three false starts on its first drive before being forced to punt, but the defense got the first of many stops on the night.

Playing without its top player, three-star receiver Zavion Thomas, Ponchatoula’s defense was able to limit what the Patriots wanted to do on offense.

Johnson ended the night with 126 yards on the ground on 12 attempts.

Ponchatoula then forced the first of six turnovers on the night. The Green Wave defense knocked the ball free on a rush, and Jaquan Livers bounced on it to give the ball back to the offense.

John Ehret was able to come up with a stop after a personal foul against Ponchatoula set it back into its own territory. The Patriots took over and were able to find the end zone following some confusion on three Green Wave penalties on one play.

Quarterback Royal Falgout pulled the RPO attempt from the running back and found Kenneth Johnson across the middle. Johnson went untouched into the end zone from 22 yards out to tie the game.

John Ehret was then able to recover an onside kick, giving the Patriots all the momentum with just under 7:00 remaining in the first half.

Ponchatoula’s Darrien Brider ended all the Patriot momentum as the defense put pressure on Falgout, forcing him to lob a ball up just beyond the line of scrimmage.

Brider came up with an interception to set up another Johnson touchdown from one yard out six plays later.

The defense then came up with another stop, forcing a John Ehret punt near its own end zone. Elijah Winters then caught the punt on the Ponchaotula side of the 50 before receiving blocks down the sideline, where he was dragged into the end zone as he crossed back over the near-side hash marks.

On the first play of the ensuing drive, Ponchatoula’s defense put pressure on Falgout again. He threw up a floating pass that traveled 10 yards in the air to Johnson.

The Green Wave led 28-7 going into halftime as John Ehret tried to make something happen to open the second half.

The Patriots ran a trick play, giving the receiver the ball to throw down the field. Clyde Gaten was there, however, to come away with one of his two interceptions. He returned the first for 60 yards for a touchdown behind blocking from Jacoby Mathews.

“It’s been great defense all year. If I had to say one thing that’s been the highlight for the whole team the entire season would be the defense,” Tierney said. “A lot of guys back on defense, so we thought we would play well.

“We moved Jacoby Mathews from offense to purely defense and that’s been a big plus, but they’ve played really well. I think we had three defensive touchdowns (Friday). That’s like the 10th defensive touchdown they’ve had this year. When you can play really good defense you have a chance.”

After another punt in the third quarter, the Green Wave offense got on the board once again.

With the win, the Green Wave hit the road, traveling to Ouachita Parish to face the No. 11 seed Friday at 7 p.m.