If you need to purchase a subscription.
You are the owner of this article.
Edit Article Add New Article
You have permission to edit this article.
Edit
Home
Special Report
News
Sports
Business
A&E
Lifestyles
Announcements
Obituaries
Opinion
Multimedia
Classifieds
Share This
1 of 4 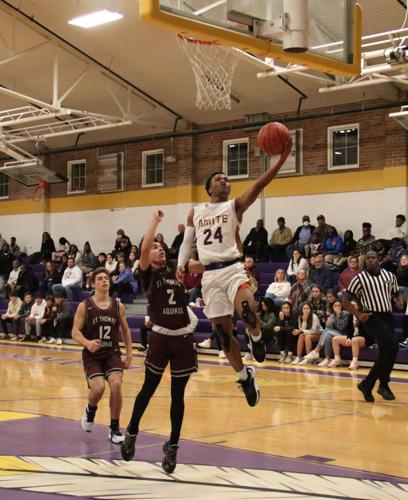 Amite’s Simeon Powell (24) scores on a lay up in transition against St. Thomas Aquinas on Thursday. 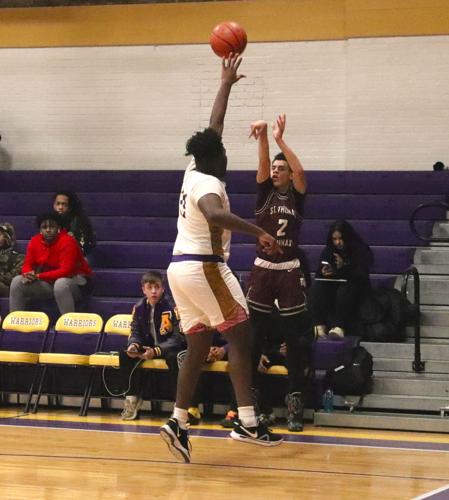 St. Thomas Aquinas’ Cace Reed connects with a corner three as the buzzer sounded at the end of the third quarter against Amite on Thursday. 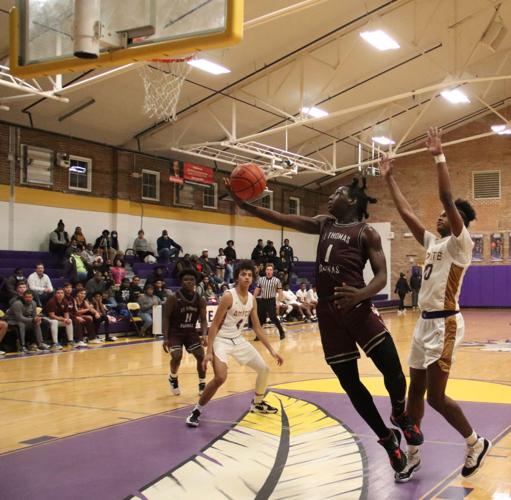 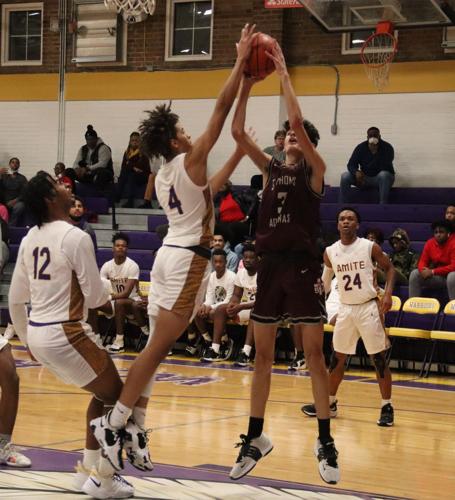 Amite’s Simeon Powell (24) scores on a lay up in transition against St. Thomas Aquinas on Thursday.

St. Thomas Aquinas’ Cace Reed connects with a corner three as the buzzer sounded at the end of the third quarter against Amite on Thursday.

AMITE — Amite held off a second-half rally from St. Thomas Aquinas on Thursday to snap the Falcons’ six-game win streak with a 66-63 win.

In a playoff atmosphere, each side played with intensity on both sides of the floor. St. Thomas kept tight pressure on Amite point guard Simeon Powell, trying to force turnovers early.

“We usually do a good job pressuring the ball full court. One of our guards got hurt, so that really hurt us with our substitutions, and we got a couple fouls, so we had to go to a zone there,” St. Thomas head coach Raymone Andrews said. “The big guys just have to be a little tougher.”

Amite head coach D.J. Cannon said he wanted the guards to work out of their triple threat instead of putting the ball on the floor, but that was something they didn’t do well early.

St. Thomas’ Cace Reed knocked down a 3-pointer with 36 seconds left to give the Falcons a 14-10 lead. Powell knocked down a shot to cut the deficit to two points before Lemar Harris hit a 3-pointer at the buzzer, putting the Warriors up 15-14 after the first quarter.

St. Thomas rallied back as Reed knocked down a corner three and was fouled on the shot. He completed the four-point play to give the Falcons a 20-17 lead.

“Cace came out there and made some big shots (Thursday night). That’s what we’ve been asking, just to play within himself,” Andrews said. “When he does that he’s a good basketball player. Proud of (Reed) for stepping up (Thursday).”

Reed finished with a team-high 17 points. Vaughn added 14 points for the Falcons.

Both defenses locked down for the next five minutes of the second quarter with the lead going back-and-forth until Powell knocked down a shot to go up 25-24. Harris then got to the goal on a quick move inside and hit one free throw on the next trip to put Amite up 28-24.

Nearing the end of the half, St. Thomas was called for a block on a layup. Andrews, arguing the non-charge call was given two technical fouls and ejected from the game, forcing assistant coach Ryan Dawsey to take over for Andrews for the final two quarters.

Powell knocked down all three free throws and gave Amite a 31-24 lead at halftime.

“(Dawsey) played for me, he knows the game well. I’m proud of him; he did a good job,” Andrews said. “I know I put him in some hot water in the second half, but he stepped up.”

Amite opened the second half looking to trap St. Thomas’ guards, but the Falcons rallied back, taking a 32-31 lead as Darius Vaughn, Kendrell Perry and Reed combined for an 8-0 run to start the second half.

Javae Gilmore ended Amite’s drought, becoming a bully in the post, but the Falcon defense was relentless, earning easy opportunities at the goal.

A three from Perry, layup off a steal from Vaughn and 3-pointer on an inbound catch-and-shoot from Reed with time expiring pushed the Falcon lead to 41-35 as the buzzer rang for the end of the third quarter.

Gilmore and the Warriors continued the inside attack in the fourth quarter.

“I knew we had to run the floor, and I knew we would have the height advantage in the post,” Cannon said. “I was really emphasizing getting the ball in the post and scoring that way.”

Amite scored on three consecutive possessions with Gilmore to bring the game to within two points. The Warrior defense followed with the momentum, keeping St. Thomas off the board until Braylon Jackson gave Amite a 49-48 lead on a fast-break 3-pointer with 4:21 left in the fourth quarter.

Gilmore then beat his man inside on the next possession following a St. Thomas miss and forced Dawsey to call a timeout with 3:41 left, down 51-48. He finished with a game-high 18 points. Harris added 14 points of his own.

Perry scored out of the timeout, but Amite was able to hold a five-point lead as the Falcons started to foul with nearly 1:00 left in the game.

Leading 64-59 with 21.9 second left, St. Thomas’ Jake Berner went 1-for-2 from the free-throw line, but Jackson knocked down both of his for Amite.

On an inbound, Reed came away with a steal and connected on the shot, but he was called for a travel at the goal, giving Amite the ball back. Reed went 1-for-2 at the free-throw line and Berner connected with a shot under the goal on an offensive rebound with 1.3 seconds left to make things 66-63.

Amite was able to get the inbound in on St. Thomas’ press, sealing the win.

“I feel this is a nice confidence booster for our kids,” Cannon said. “They know that we have the discipline to go and beat really good teams.”