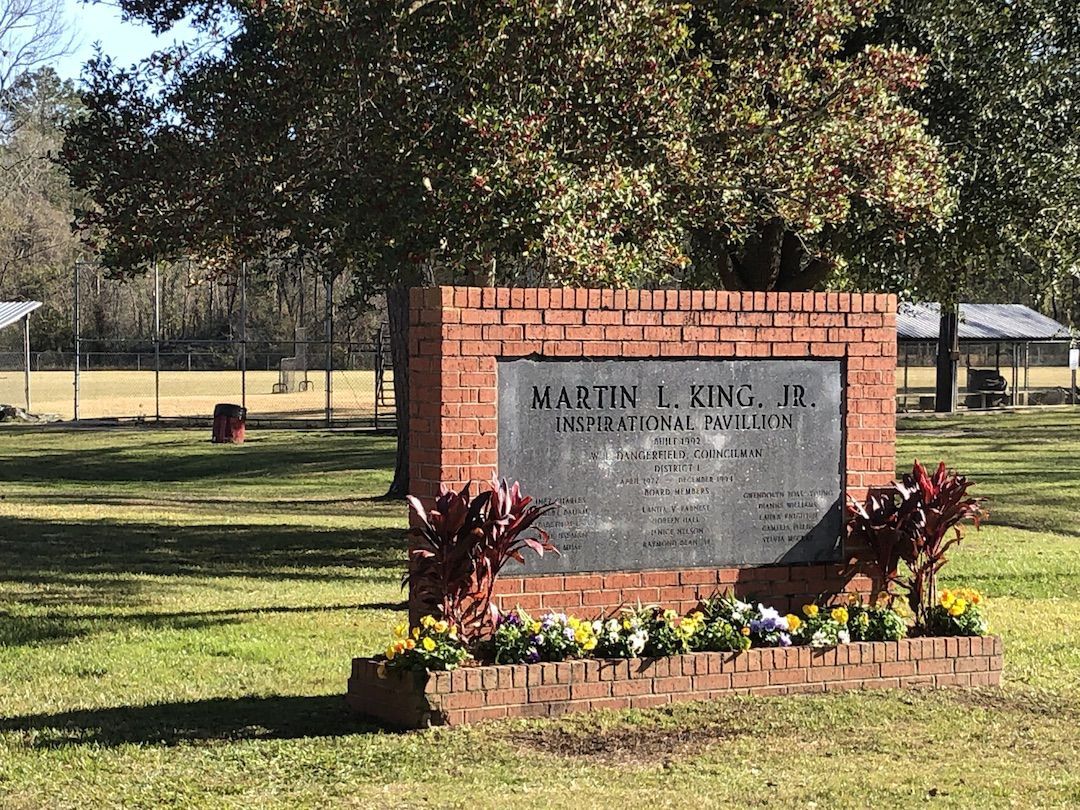 The entrance marker at Martin Luther King Jr. Inspirational Pavillion notes it was established in 1992 when Wilbert Dangerfield served as District 1 councilman. The park in north Hammond will be the site of MLK Day festivities Monday. 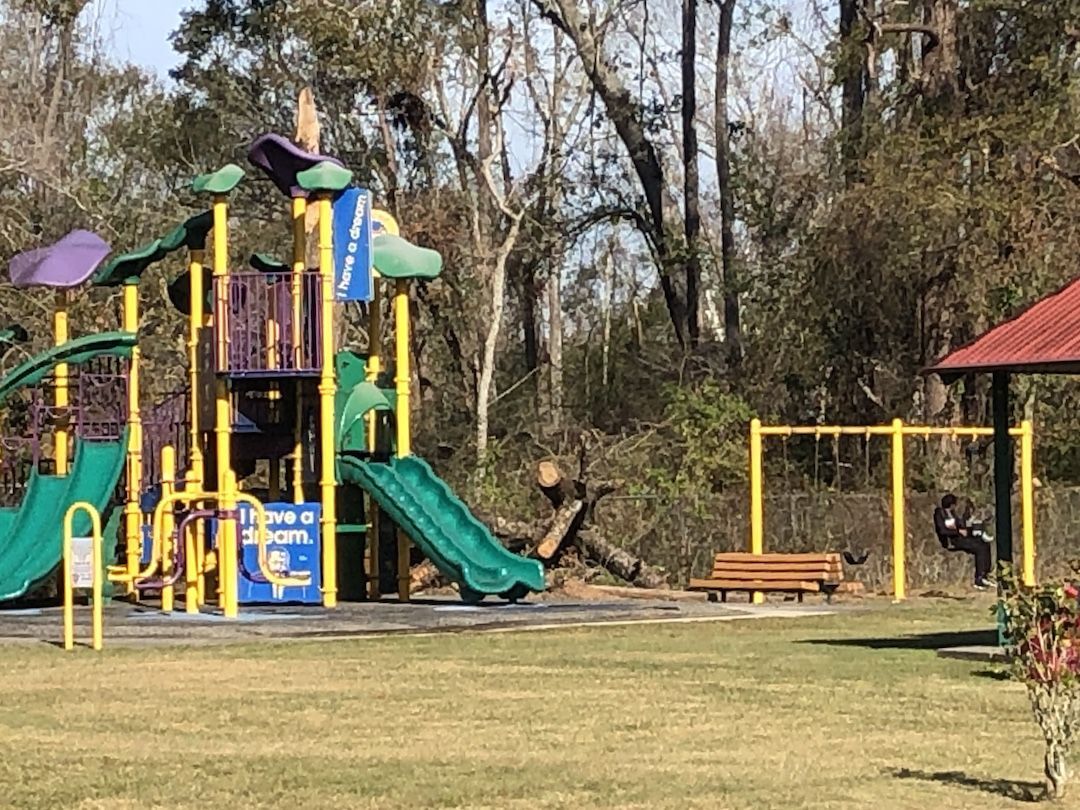 A dad, at far right, swings with his child on a sunny Friday afternoon at MLK Park in Hammond. Traditional Martin Luther King Day ceremonies will begin at noon Monday in the park. 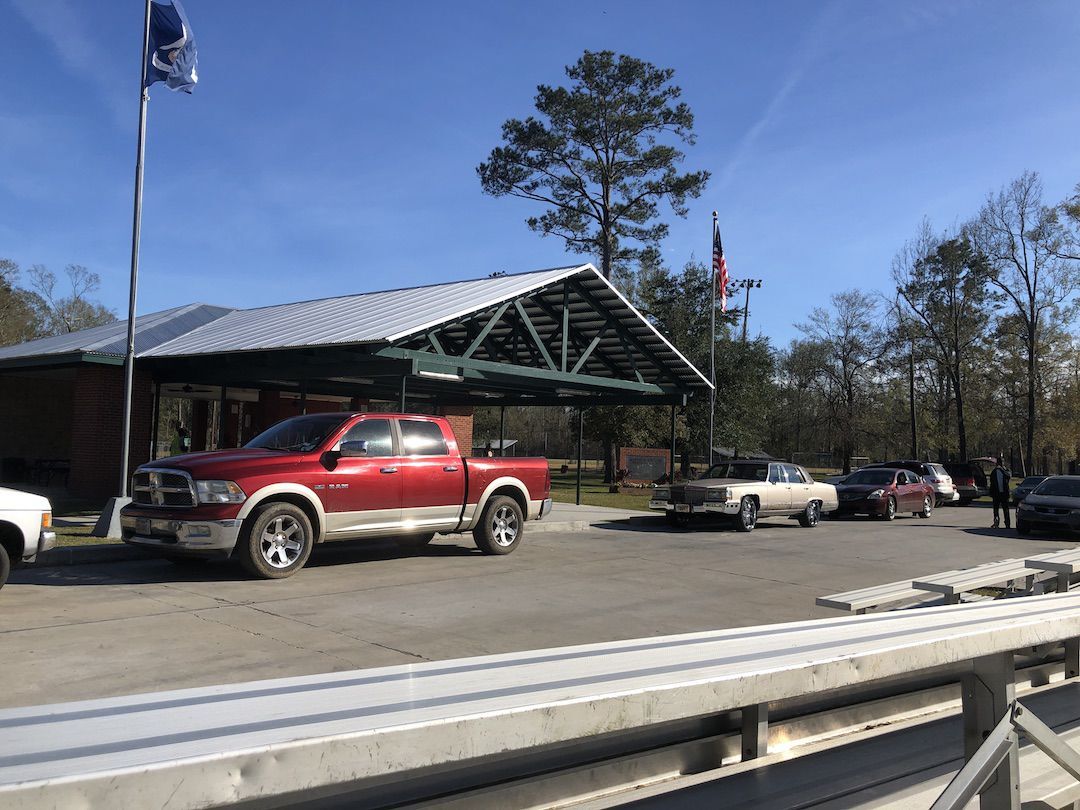 Bleachers are in place for the annual MLK Day celebration on Monday in Martin Luther King Park in Hammond.

The entrance marker at Martin Luther King Jr. Inspirational Pavillion notes it was established in 1992 when Wilbert Dangerfield served as District 1 councilman. The park in north Hammond will be the site of MLK Day festivities Monday.

A dad, at far right, swings with his child on a sunny Friday afternoon at MLK Park in Hammond. Traditional Martin Luther King Day ceremonies will begin at noon Monday in the park.

Bleachers are in place for the annual MLK Day celebration on Monday in Martin Luther King Park in Hammond.

A 13-year-old girl with a dynamic message, a confident voice and a powerful legacy inspires Dr. Robert Martin of Hammond.

Dr. Martin will be the keynote speaker Monday at the local ceremony celebrating the life and legacy of that teenager’s grandfather, civil rights activist the Rev. Dr. Martin Luther King. Robert Martin plans to mention young Yolanda Renee King in his speech.

She considers herself an activist for human rights and encourages other youths to “do something.”

“I have a dream that enough is enough,” the young girl told a crowd at the 2020 March for Our Lives in Washington, D.C. “I want to ask the young people here to join me in pledging that we have only just begun. Find something that you are good at and use it for good. That’s what activism is all about.”

Dr. Martin predicts Yolanda King will be very successful if she can make a connection with other youth.

“She will be, in my opinion, a very powerful force,” he said.

“Each person has their own mission,” he added, echoing one of Yolanda King’s themes. “We all have a role to play.”

Dr. Martin, at age 80, has held many roles himself. A native of Hammond who grew up in Seattle, he served in the military and has been an educator, counselor, Hammond city councilman, social worker, life coach, general contractor, elderly services officer with the Tangipahoa Parish Sheriff’s Office, patient and family advocate with North Oaks Health System and member of the parish library board. He is also a second-generation Buffalo Soldier and vice president of the Buffalo Soldiers 9th and 10th Calvary Association.

Dr. Martin was still polishing his words for the MLK Day event when contacted Friday.

Although he expects to speak no more than 10 or so minutes at the ceremony, he said, “I want to give people something to think about.”

The festivities Monday will begin with a parade from Zemurray Park to MLK Park at 11 a.m. A change from previous years, the marchers and riders will line up at the park’s new parking lot near the swimming pool instead of on the park’s circular road. They will line up at 9:30 a.m. then embark from West Coleman Street to proceed to the park in north Hammond.

Grand marshals for the parade are Mrs. Earline Dangerfield and Willie S. Smith.

Mrs. Dangerfield supported her husband, the late Hammond City Councilman Wilbert Dangerfield Sr. during his years of service to the Hammond community. She also worked as a certified nurse’s assistant and insurance representative and was active in church work.

Mr. Smith, a Hammond business owner, grew up in Hammond and learned his skills as a plumber in Los Angeles, earning the nickname “Wet Daddy.” His hobbies are riding his candy apple red Harley, going on trips with the Hog Riderz motorcycle club and regaling others with stories about his experiences and anything that has to do with plumbing. He is described as friendly, outgoing and always willing to lend a helping hand.

The queen is Zoe Denea Bernard of Ponchatoula, a first-year student at St. Thomas Aquinas High School. Her parents are Christopher and Summer Bernard. She has a 3.8 GPA and is a member of the basketball team. She is a graduate of St. Joseph Catholic School, where she maintained a 4.0 GPA. She is described as an award-winning artist who has had artwork appearing on published Christmas cards. She has also received awards from Beta Club, the 4-H, a Coaches’ Award and more. In addition to being a book worm, her hobbies are drawing and singing, and she plans to study anesthesiology at the University of California at Los Angeles.

The king is Brandon Bezell Ferguson Jr., son of Brandon and Jemina Ferguson. At Hammond High, he is an honor student, in the IB Programme, member of the basketball team. His hobbies are playing video games and making excellent grades. He looks forward to scoring perfectly on the ACT, going to college and then greater things.

Coordinator Gwen Ross-Bell said the MLK Park Association is looking for a return of warm sunshine Monday and beautiful weather after this weekend’s cold and rain.

All five Hammond city council members and Mayor Pete Panepinto or his designee are on the program to present greetings. Also on the program to make presentations and introductions are Patricia Morris, Melvin McElway, Delmas Dunn, Crystal Stanley, Sandra Weary, Lemar Marshall, Janice Carter-Beard, Freeman Ramsey and Mary Dantzler. Bishop Larry Jackson will give the benediction.

Men in the community turn out for MLK Day each year to cook for the crowd, Ross-Bell said. They traditionally set up their RVs in the park and start cooking early Monday morning – barbecue, chicken, ribs. Everything is free. No sales take place on the grounds on MLK Day, she said.