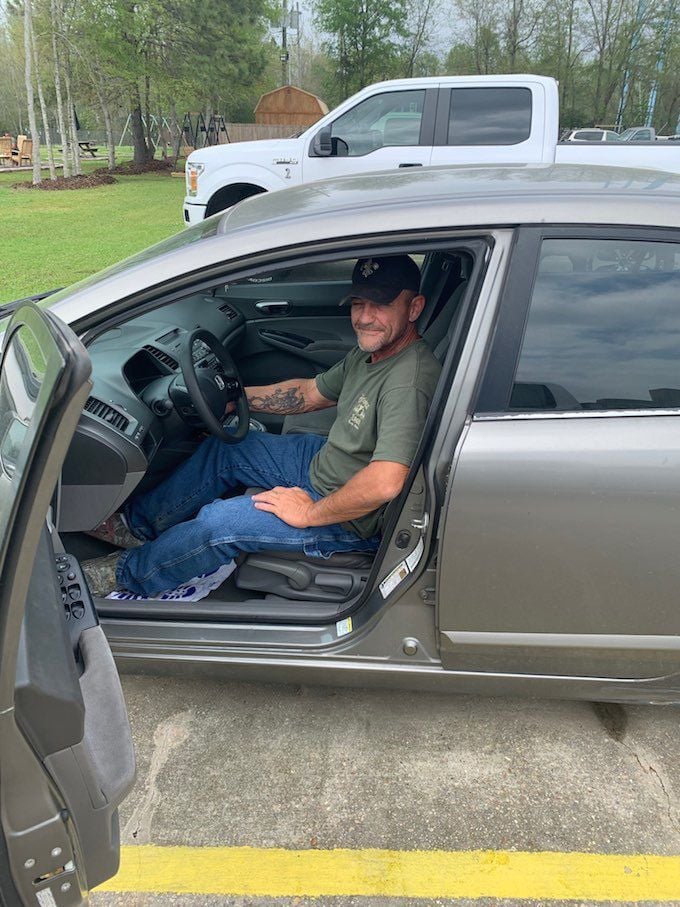 A licensed driver with insurance, veteran Michael Hall gets in his 2005 Civic Honda for the first time. Quad Vets selected him to receive the vehicle that was donated by a car dealership. “I feel like a brand new being,” Hall said. 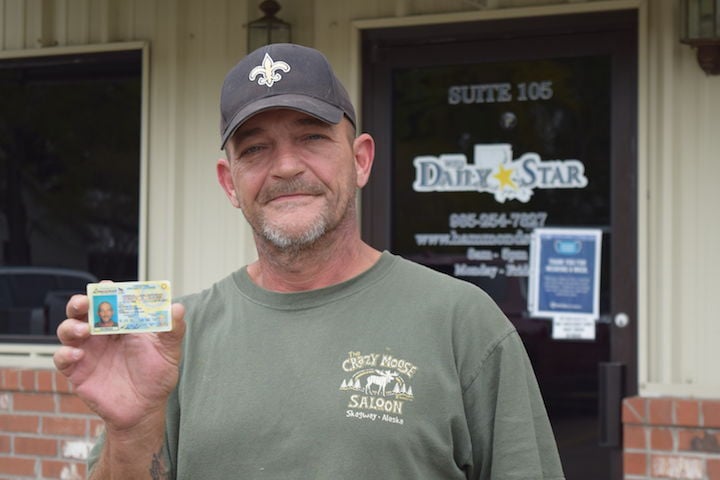 Michael Hall, a military veteran, proudly shows his new driver’s license, which he got Friday at the DMV office in Hammond. This is his first license in over 20 years.

A licensed driver with insurance, veteran Michael Hall gets in his 2005 Civic Honda for the first time. Quad Vets selected him to receive the vehicle that was donated by a car dealership. “I feel like a brand new being,” Hall said.

Michael Hall, a military veteran, proudly shows his new driver’s license, which he got Friday at the DMV office in Hammond. This is his first license in over 20 years.

Veteran Michael Hall had been stuck in a cycle for 20 years, overwhelmed by financial obligations that left him homeless and relying on others to get around.

That cycle ended Friday when he got behind the wheel of his new 2005 Honda Civic and drove away from the insurance building, brand new license and insurance in hand. With the help of Quad Vets, he had been anticipating and working toward this moment – just being able to get into a car and go.

“I’ve always been stuck for the past 20 years, and, thank God, I broke that cycle. I’m out of that, and I’m a new person. I feel like a brand new being,” Hall said.

Hall began the process to get his license in January after learning that Quad Vets had chosen him to receive a vehicle donated to the agency by a car dealership.

Wallace Sibley, executive director of Quad Area Community Action Agency, said it was up to Quad Vets to pick the absolute best recipient.

“Of course, Mike was our choice because he’d come such a long way and bettered himself,” Sibley said. “Now, he’s got his own place. He’s got his own job, everything.”

“You have success stories and then you’ve got Mike Hall,” he added. “You’ve got the guy who went two, three, four, five steps beyond success. That’s what makes it special.”

Hall said getting his license after not having one for around 25 years was like going to DisneyLand for him. It’s special and exciting.

So much time had passed since he last had a driver’s license that he was not even in the system anymore. He had to attend driving school and put in time to go through the whole process.

Hall is just one of the thousands of veterans that Quad Vet has helped over the past 15 years.

“We have a 9 out of 10 success rate helping guys like Mike at least get self-sufficient,” Sibley said. “Not all of them are going to accomplish what Mike does... but most of them get back at least a place to stay, some income and they’re not out on the street living that way.”

Quad Vets filled up his gas tank and took care of all Friday’s expenses as a final blessing before he was out on his own.

“Now he’s got his footing. It’s like he’s coming out for the first time back on his feet on the ground,” Sibley said.

Hall said his next step will be working on reconnecting with his kids with whom he has not talked in 10 years.

Hall is a fourth-generation Army serviceman; he served in the U.S. military three years. He grew up in Gretna, lived in Metairie for a time and now lives in Hammond.

Finances played a major role in his becoming homeless, he said. He was going through a hard time, and “bills don’t care what you’re going through,” they don’t stop coming.

He had a well-paying job, he said, but when he lost it he remained under obligation to continue paying the same rate of child support to his ex-wife for his two children.

“You try to find a job, but you’re only making minimum wage. Then, you lose your apartment.”

This was all happening in the mid-2000s around when the economy went bad, he added.

“I’m trying to find a security deposit and first month’s rent to move into another place, so I wind up on my friends’ couches, and I bounce from couch to couch and that’s how it happens,” he said.

He ended up being homeless and sleeping on friends’ couches for 10 years.

“Then, the Lord struck me with stage 2 colon cancer, and it was a gift. I say that it was a gift because it brought me over and got me connected with these people,” Hall said speaking of the Quad Vets agency.

After being diagnosed with cancer, he told the Hope Center in Gretna he had no place to go. Hope Center referred him to Quad Vets.

“I told them I can’t just keep living on people’s couches, I’ve got a colostomy bag hanging off me, so they pointed me to Quad Area,” he said.

His first day at Quad Vets was June 20, 2018. Now, over two-and-a-half years later, he does maintenance as full-time groundskeeper for the Hammond-based agency. Through his job at Quad Vets, he has a long-term career with retirement and health benefits.

He has also gotten a chemical imbalance under control with medication and is seeing things much clearer now.