GRAND SLAM – Tylen Moore comes home to celebrate with his teammates after his second inning grand slam, making it 8-0 Tors. 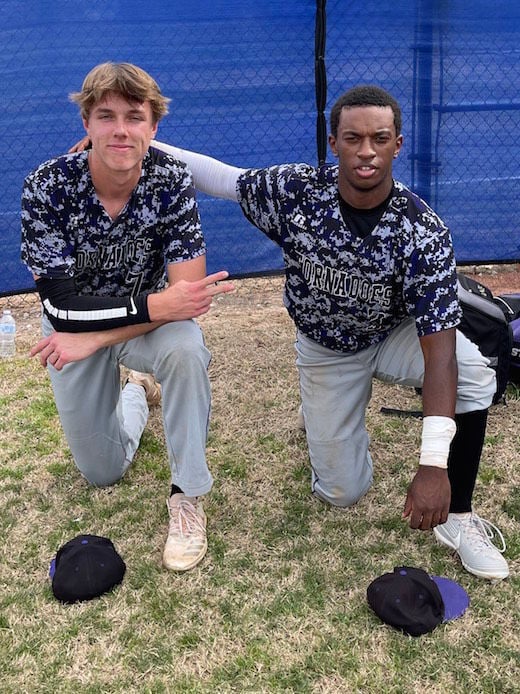 While not on the field, Tors Konner Graham, at left, and Josh Bluain watch action in the St. John Tournament over the weekend.

GRAND SLAM – Tylen Moore comes home to celebrate with his teammates after his second inning grand slam, making it 8-0 Tors.

While not on the field, Tors Konner Graham, at left, and Josh Bluain watch action in the St. John Tournament over the weekend.

Catholic-PC cracked the scoreboard first with two runs in the top of the second, aided by two walks, a single and a Tornado error.

However, with the bases loaded and only one out, starting pitcher Ian Trahan was able to strike out the next two batters looking to limit the damage. The Tors plated a run of their own in the bottom of the frame, only to have it answered with another Hornet run in the third, making the score 3-1, Catholic-Pointe Coupee. After shutting down the Hornets in the fourth, Trahan was lifted for sophomore Konner Graham.

In the bottom of the sixth, following a Scott Perise walk and Trahan reaching on an error, Michael Cunningham singled both in to tie the score at three. The score remained tied till the bottom of the eighth (extra innings), when Trahan drew a lead-off walk, and Josh Flemming reached on an error.

Cunningham laid down a text-book SAC-Bunt to move Trahan and Fleming over to second and third. With one out, senior Kaden Slocum was intentionally walked to load the bases for junior Josh Bluain. On an 0-2 pitch, Bluain blistered a single into left field, scoring Trahan, and notching the victory for Hammond.

In the day’s finale, Hammond scored 15 runs off 13 hits. One of those hits was a Tylen Moore grand slam blast over the left-center field wall. It wasn’t enough, as host team St. John overcame the Tornado onslaught to eke out the win, 16-15.