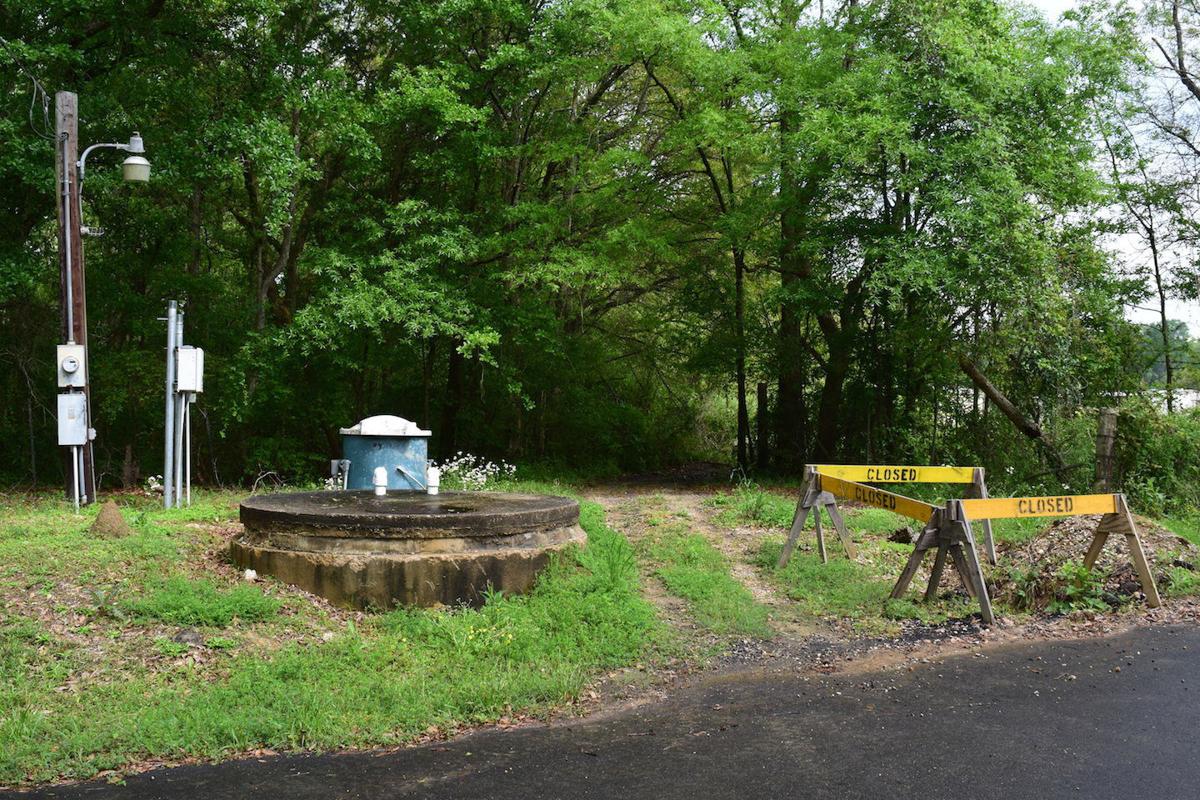 City of Hammond’s lift station on Mooney Avenue sits at the end of a long row of sewage-related backups in District 3 homes north of the area. 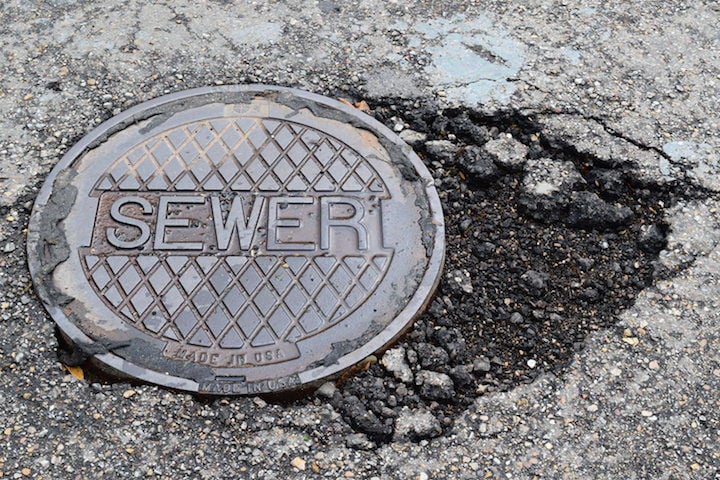 The manhole on Mississippi Street is in the heart of a growing problems in District 3. The manhole and homes in the area back up with raw sewage during times of heavy rains. City administrators and council members have different ideas about how much funding is needed now to solve the problem.

City of Hammond’s lift station on Mooney Avenue sits at the end of a long row of sewage-related backups in District 3 homes north of the area.

The manhole on Mississippi Street is in the heart of a growing problems in District 3. The manhole and homes in the area back up with raw sewage during times of heavy rains. City administrators and council members have different ideas about how much funding is needed now to solve the problem.

“We have a problem right now with sewer issues in District 3, so we’re going to go before the council and ask for approval for $750,000 to start working harder in that area,” he said. “We’re having infiltration when the rain come through.”

He plans to bring the proposal before the council Tuesday.

Administrator Lacy Landrum said the proposed $750,000 in projects would upgrade lift station 24, which is the Mooney Avenue lift station, add a new lift station on Mississippi Street and include approximately $150,000 for a sewer system evaluation survey and sewer line rehabilitation in District 3.

These projects and the funding would be in addition to what is already allocated and planned for the current fiscal year’s sewer-related projects.

Projects already funding for this year include:

$265,000 for maintenance and repair in the sewer utility budget (not counting personnel or fuel costs);

$241,000 for maintenance and repair in the sewer treatment plant annual budget (not counting personnel, permit or fuel costs); and

Grants and loans used to improve the sewer system.

District 4 Councilman Sam DiVittorio plans to ask the city for even more.

“The city engineer says we need $12,000,000 to fix the sewage problem,” DiVittorio said. “I am asking the administration to present at the next city council meeting on April 13th an explanation of the financing options available to pay for the needed infrastructure improvements.”

This would have to go to the voters for their approval, he said, but he believes the people should have the opportunity to decide how their money is spent and whether they want to fund these improvements.

“This administration has ignored these problems for almost eight years. Instead of investing in sewage infrastructure improvements they brought meter readers in house instead of outsourcing that activity. Bringing that in house meant the city had to buy four new vehicles, meter reading equipment, hire four new full-time employees, pay for a few, insurance, and maintenance on the vehicles. The city also needed about a quarter of a million dollars in software to make all these systems talk to each other,” he added.

According to city officials, multiple strategies have been implemented to maintain and improve the system’s operation, including infiltration/ inflow correction to ensure the integrity of the system; improvements to Hammond’s South Wastewater Treatment Plant to increase the efficiency of sewage treatment; and the installation of automatic emergency generators at sewer lift stations to ensure uninterrupted operation during power failures and prolonged power outages.

All these efforts have served to reduce infiltration / inflow and improve Hammond’s sewer system’s capabilities to process wastewater and cope with issues as they occur, Landrum said.

Infiltration/ inflow has many causes, however, and conducting surveys of the entire system and rehabilitation pipes, lift stations and manholes is the only way to ensure there is no more infiltration/ inflow, she added.

According to city officials, causes of infiltration/ inflow include:

Places where drainage systems may be connected to sewer lines.

Most of the city’s gravity-based sewer collection system dates to between 1920 and 1940 with construction of 8- to 24-inch in diameter vitrified clay pipe mains, 4- to 6-inch in diameter service lines and brick manholes. In 1975, these were replaced in some areas by PVC mains and service lines and precast concrete manholes, and in the 1990s, about 20 percent of the system was successfully rehabilitated with cured in place pipe repairs, according to the city.

“Since the 1990s, regular cleaning, point repairs and CIPP have been used to maintain the system, but, several times in recent years, heavy rainfalls have led to infiltration and inflow, or stormwater entering the sewer system through holes, cracks, and other breakages,” Landrum said. “When I/I occurs, it increases peak flow through the system – in the worst recorded instances, to more than 11 million gallons per day – causing backflow into streets, businesses and homes. Hammond’s South Wastewater Treatment Plant was designed for daily flows up to 4.1 million gallons and can process up to 8 million gallons.”

District 4 Councilman Sam DiVittorio said that Hammond has major sewage problems all throughout the city, including in his district.

“People in the Iowa District must leave the caps for their cleanouts off so that the sewage overflows out the cleanout instead of into their houses,” he said. “Rosewood and the neighborhoods between Thomas Avenue and Church Street are constantly having sewage issues. Sewage is coming out of the manholes in District 3.”

In District 4, around the Rosewood area – Rosewood Drive, Rosewood Circle, Dixie Drive, Carter Street, Richardson Street and Ruland Street – are having back ups, although it is not as bad what is happening in District 3. There are residents of these areas, as well as businesses in the Thomas Street and Morris Avenue area, that have to have backflow preventers to prevent sewage from backing up when it rains and sometimes even when it is not raining, he explained.

“That’s not how it’s supposed to work, but that’s been the Band-aid fix for a while,” DiVittorio said. “All those older areas need a revamp of sewer.”

He stressed that the issue has been going on for years and is getting worse as the sewage lines continue to age.

“Without significant investment the problems will also get worse,” he said.

Another problem is the companies that lay fiber optics and other cables frequently drill through sewage lines creating problems, he said.

He stressed that under federal law the city cannot do anything to prevent companies from laying the lines, nor do they want to because they want the city to have high-speed data available everywhere.

DiVittorio suggests that with the number of employees the city has on the street all the time – code enforcement, sewage and water, park rangers, law enforcement, and fire department – the city should be able to know when an employee sees a cable company laying lines and report it to the sewage department. As soon as the cable company finishes, the city should come with its camera equipment and check lines for damage, sending the company a bill for repairs, if found.

“Because fixing all the lines will ultimately do no good if we just let people come drill holes through them again,” he said.

According to the city, more than $730 million in Lake Pontchartrain Basin Restoration Program funding has been received since 2005 to install generators at the city’s sewer lift stations, which has allowed more than half of the 55 stations to now be equipped with emergency power.

According to city officials, the city received a $5 million low-interest loan through the Clean Water State Revolving Fund in 2013 to correct infiltration / inflow in central Hammond using cured in place pipes and point repairs. In 2014, nearly $1 million in Louisiana Community Development Block Grant funding was used to add pretreatment facilities to the Treatment Plant.

The City received state and federal permission in 2015 to expand CWSRF work into areas outside central Hammond where a city-funded sewer system evaluation survey had revealed significant infiltration / inflow. And in 2018, the City was awarded another block grant of $675,000 for infiltration / inflow work in District 3.

“Most recently, the City secured a $2.1 million CWSRF loan to add a fourth lagoon and more aerators at the Treatment Plant to increase detention time and improve the overall treatment of wastewater,” city officials said.