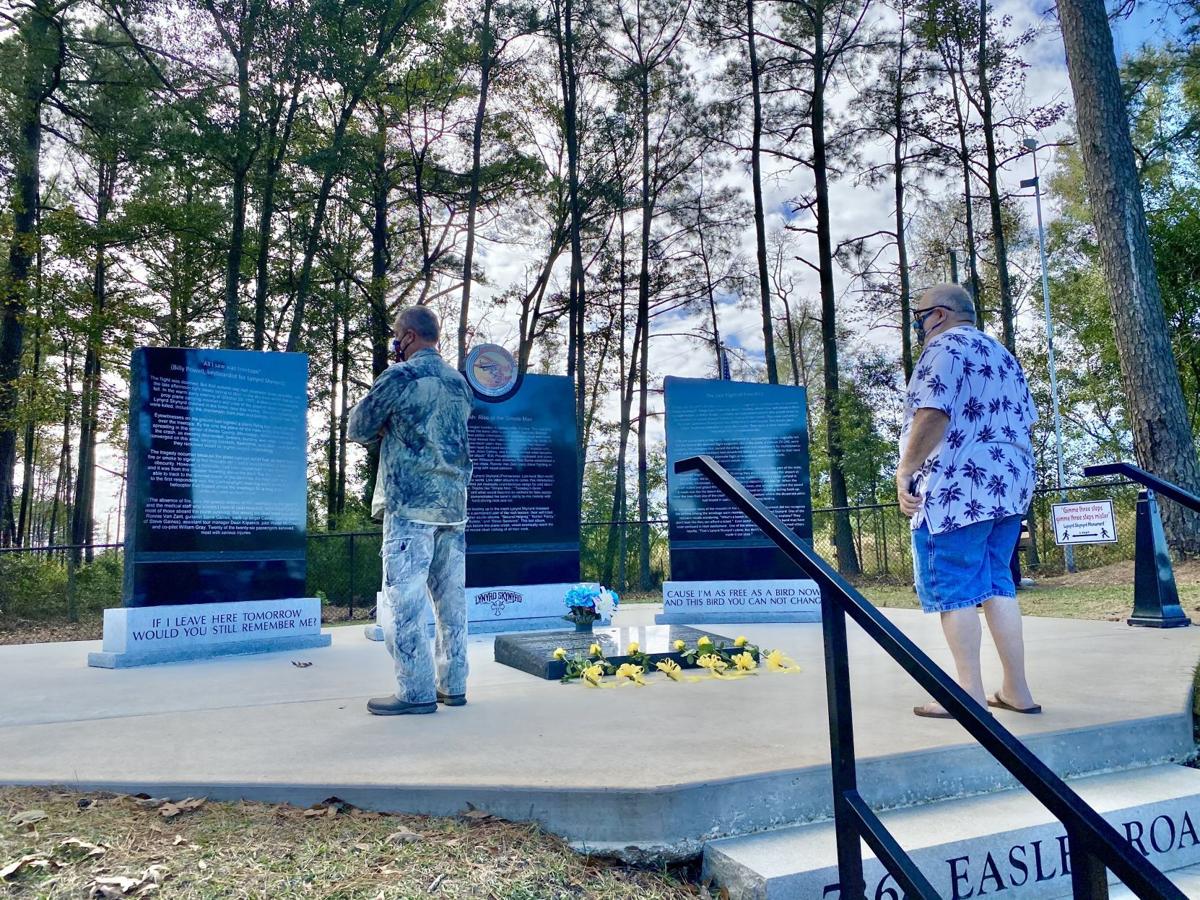 ANGELS AND FUSELAGE – Visitors read the words on a roadside memorial near the site of the plane crash that claimed the lives of band members and road crew that belonged to Lynyrd Skynyrd. 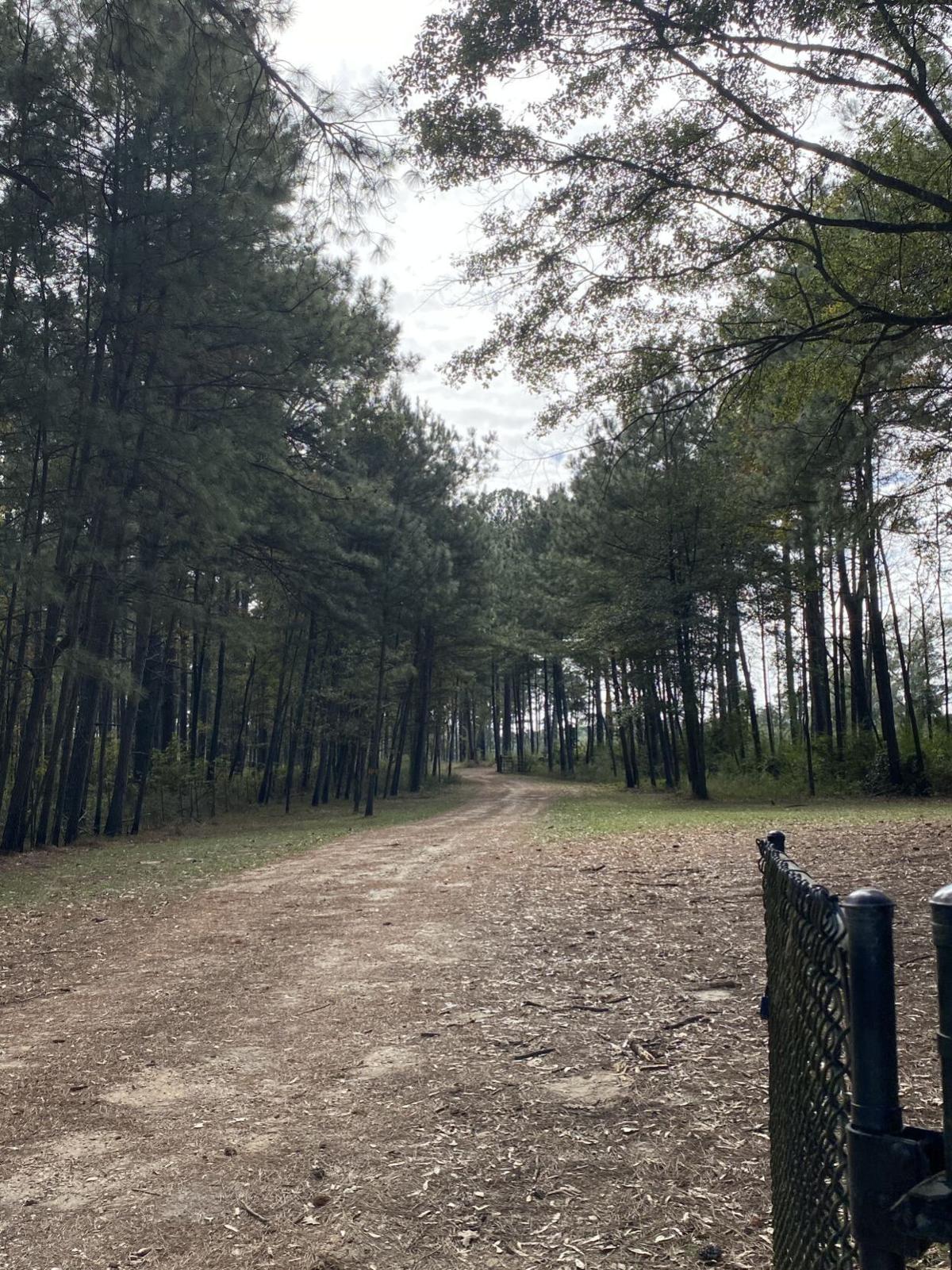 The private drive near the memorial leads to the wooded area where the plane went down. Only friends and family of the victims and survivors have been allowed to enter. 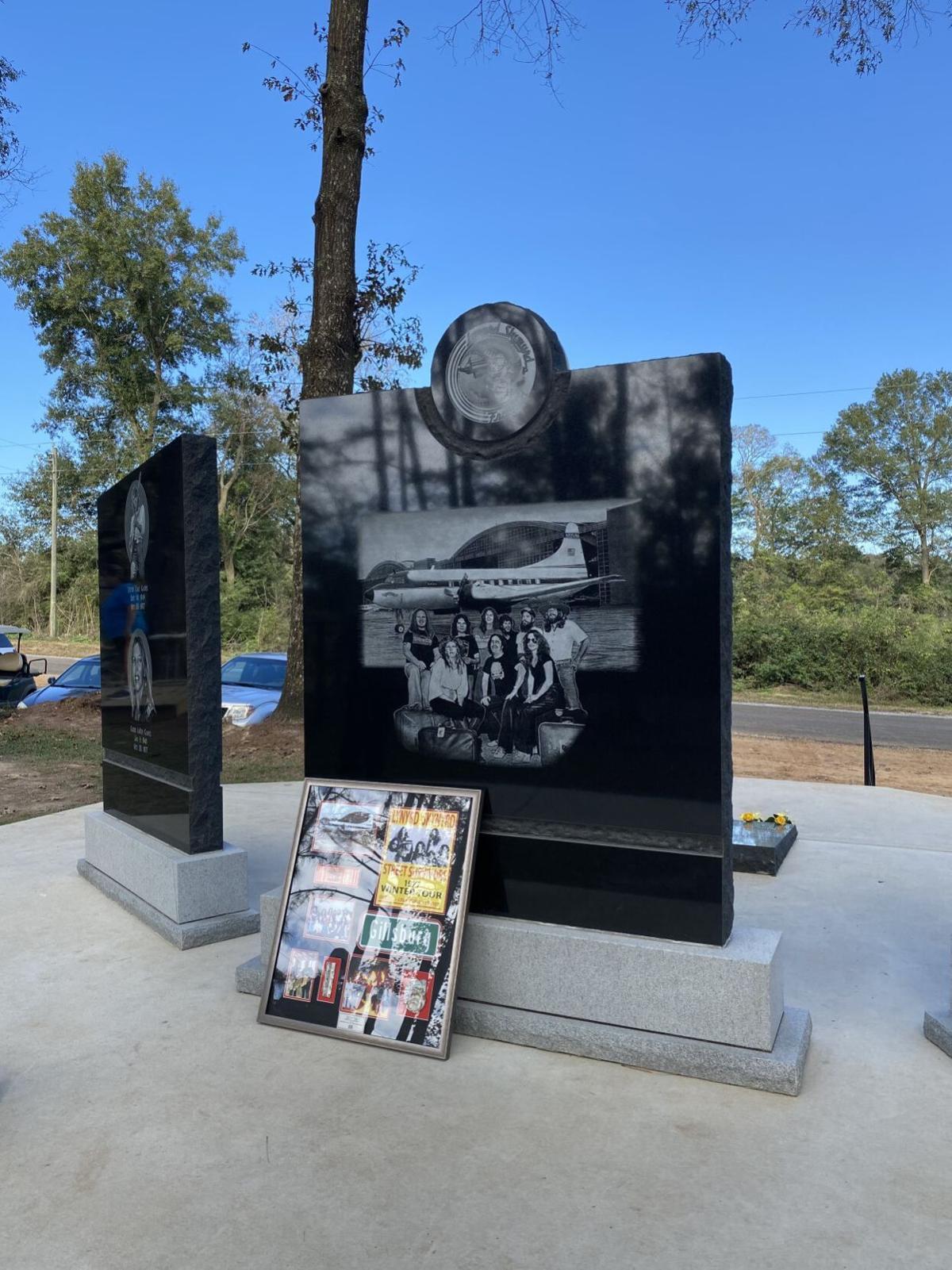 The likeness of the band and crew members is etched in stone. 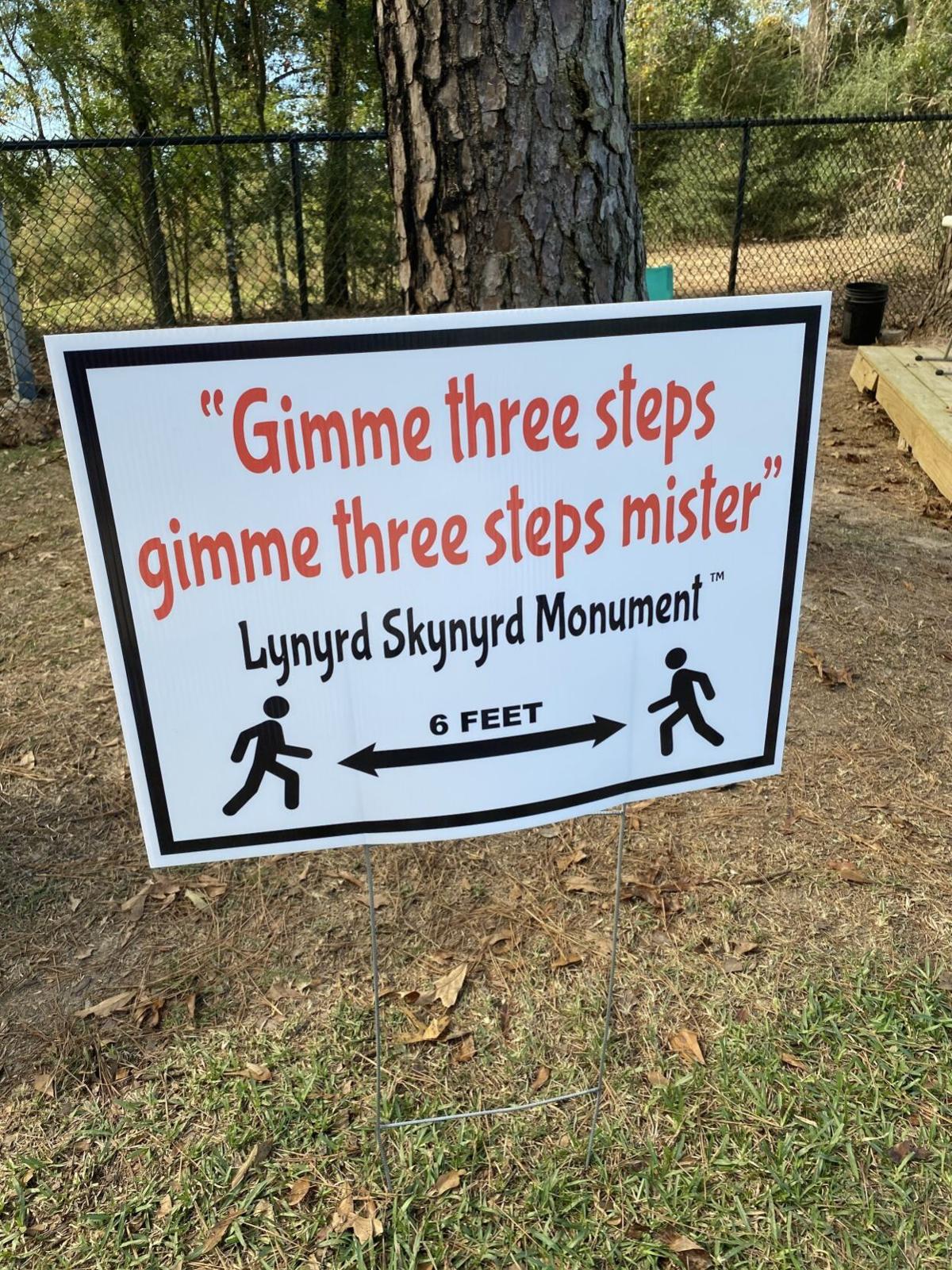 Signs for social distancing at the memorial use Lynyrd Skynyrd song lyrics to get a point across.

ANGELS AND FUSELAGE – Visitors read the words on a roadside memorial near the site of the plane crash that claimed the lives of band members and road crew that belonged to Lynyrd Skynyrd.

The private drive near the memorial leads to the wooded area where the plane went down. Only friends and family of the victims and survivors have been allowed to enter.

The likeness of the band and crew members is etched in stone.

Signs for social distancing at the memorial use Lynyrd Skynyrd song lyrics to get a point across.

Ricky Wascom had just started working at the Southland Steel in Greensburg when he heard the news that the plane carrying Lynyrd Skynyrd band members had crashed in nearby Gillsburg, Mississippi.

It was Oct. 20, 1977 near Easley Road off MS 568. After departing from Greenville, South Carolina, the ill-fated flight had been on course for a concert in Baton Rouge at LSU. Six of the 26 passengers, including the band’s frontman Ronnie Van Zant, guitarist Steve Gaines and backup singer Cassie Gaines, died on impact.

“My first instinct was to go up there and try to help out on the scene. But I knew it was going to be bad, and I wasn’t sure if I wanted to see the band like that,” Wascom recalled Friday. “I was sad. I just loved them. I thought they were one of the world-class rock bands.”

Wascom is among a group of local friends who began planning a memorial at the crash site five years ago. Through fundraising efforts, they got the memorial built about a year ago, and it has become one of the biggest tourist attractions in southwest Mississippi.

And that was even before Sunday, when the State of Mississippi unveiled highway signs along Interstate 55 and MS Hwy 568 providing directions to the remote wooded area near the Louisiana state line.

The memorial’s guest book includes more than 4,000 signatures. Easley estimates the site gets about 200 visitors a week. Visitors have come from as many as 19 nations around the world, he said.

“I was 7 when it happened, and I remember how sad my brothers were because they loved the band so much,” said fellow board member Krystina Anderson of Gillsburg.

“Every 20th date of the month I lay yellow roses at this site, and I have for the past year and half,” Anderson said. “People in Gillsburg started talking about it, and now I’m known as the Rose Lady.”

Over the years family members of survivors and victims have frequented the site, some for closure and some to feel connected to the band, she said. Charlie Daniels, Ted Nugent, members of Molly Hatchet, and many more famous musicians have stopped at the small country road surrounded by woods and farms to pay their respects.

First responders from Mississippi as well as St. Helena and Tangipahoa parishes rushed to the crash that night. Amite Fire Chief Bruce Cutrer was one of them.

“The feeling was just disbelief,” Cutrer said. “But we just blocked everything out and embarked on our mission. I didn’t know anything about it being Lynyrd Skynyrd on that night, but I found out it was them the very next day.”

Cutrer said six firefighters and other Tangipahoa law enforcement agencies, along with previously responding units Amite and Pike counties, went into the heavily wooded area and crossed a waist-deep creek before reaching the wreckage.

“Things had kind of settled by the time we arrived, but I remember there being a lot of people once we got there,” Cutrer said. “I have responded to plane crashes before but never one that big.”

The land owner, Dwain Easley, of Gillsburg, said that night is forever burned in his memories. While eyewitnesses have gone on record to say they saw the plane flying low, Easley said he never saw it in the air but he heard it crash to the ground.

“When we heard it, we thought it sounded like a car crash,” he said. “We started heading that way, and we could hear people crying for help.”

Easley said he began to bull both bodies and survivors from the wreckage, initially unaware it was Lynyrd Skynyrd.

“I was aware of their music and liked it very much, but I had never seen a photo of them,” Easley said. “When I looked inside the plane, I thought they looked like hippies. I saw their long hair and beards. My first thought was ‘What’s a bunch of hippies doing on an airplane?’”

When he left the scene and returned to the road, Easley said a boy about 15 years old walked up and informed him that the victims he had just helped remove from the wreckage were the band Lynyrd Skynyrd.

While the friends gathered and sat at the memorial Friday morning, they talked about the band’s music and how Lynyrd Skynyrd was ahead of its time but still rooted in the traditions of country music and the blues. The tale of the band’s tragic end has been featured in American pop culture for the past 43 years and is greatly considered one of the most tragic ends for an act rising in fame.

The fatal flight was detailed in the final songs on Southern Rock Opera, an album released by the band Drive-By Truckers in 2001 that loosely chronicles the band’s biography.

“I imagine this will be one of the hot tourist spots in Mississippi,” Easley said, noting that the site adds to the tragics mythos of Mississippi music. Hazlehurst, Mississippi, the birthplace of Robert Johnson, who in legend was said to have sold his soul at the crossroads, is about an hour north on Interstate 55.

Easley said the currently active members of Lynyrd Skynyrd donated a significant amount of money to make the memorial possible and visitors donate money for the upkeep and improvements daily.

“Eventually we want to add pavement for a parking lot, build restrooms, and build a gift shop,” he said.

Admission to the memorial is free and open to the public.