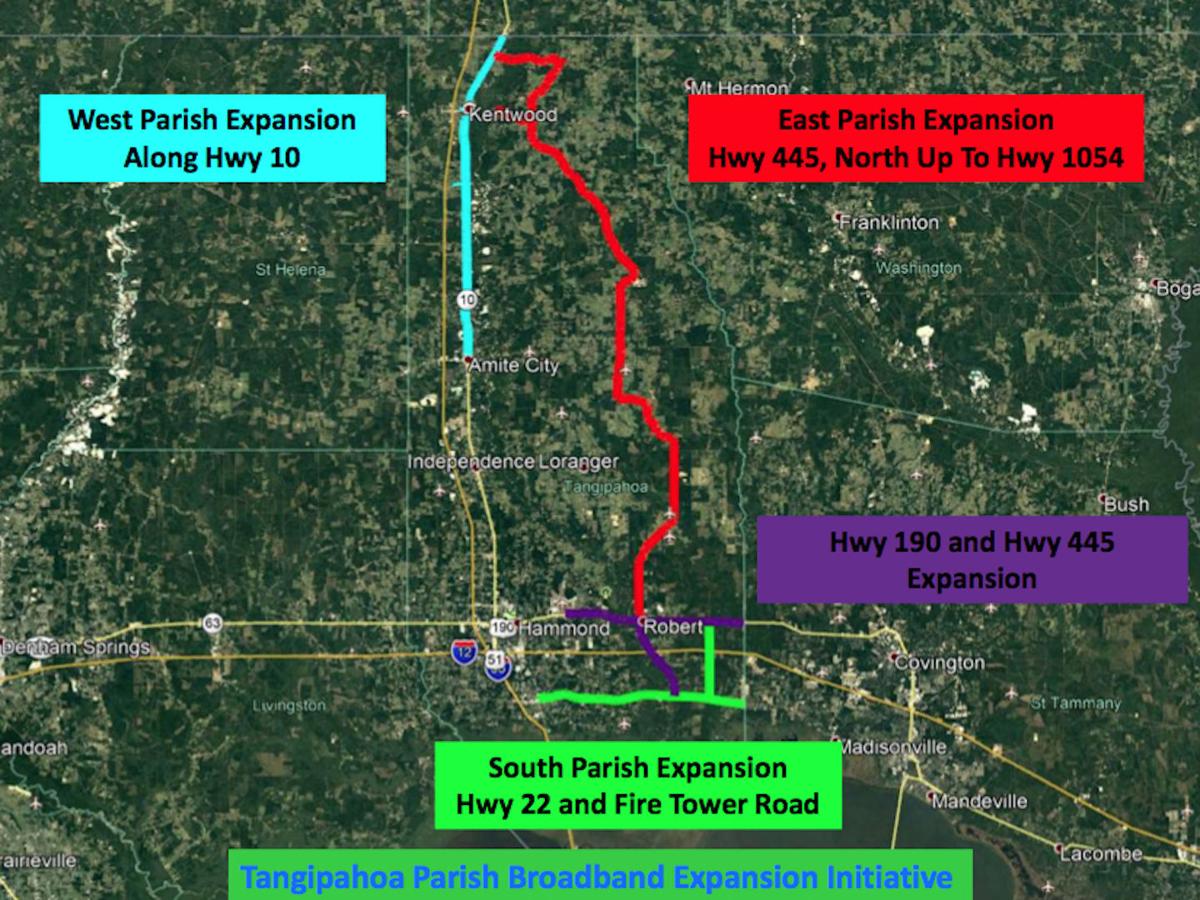 Colored lines on a Tangipahoa Parish map show parish government’s plan for a project to provide fiber routes from a network’s central office to throughout the parish. Service providers would only need to provide the routes between the network and the customer premises. 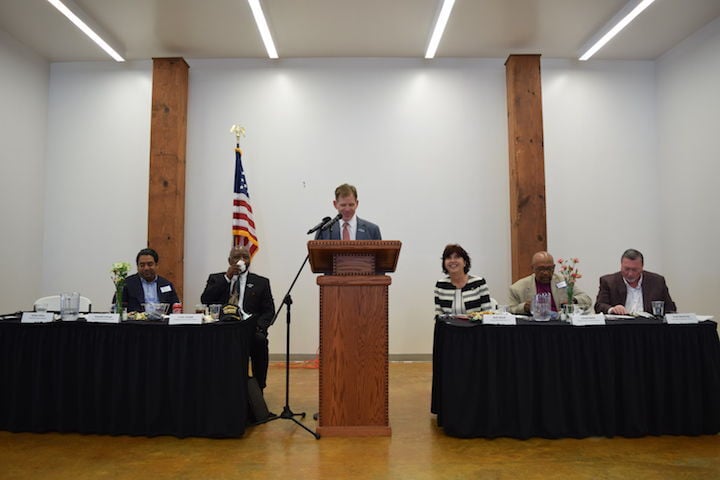 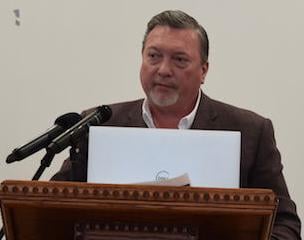 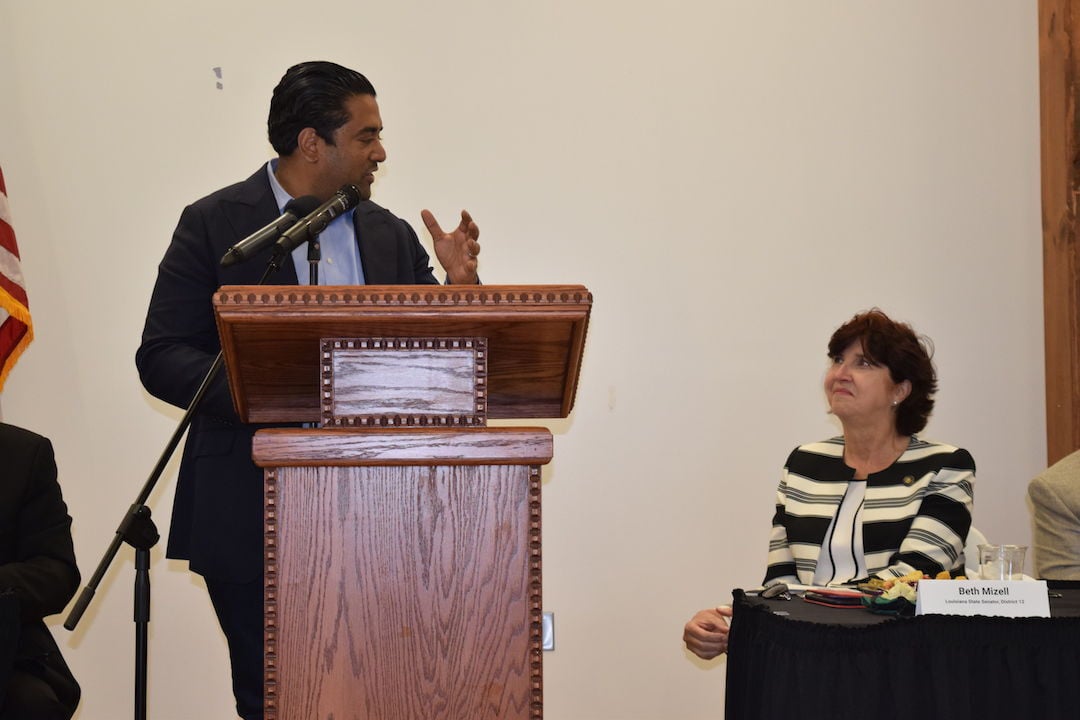 Veneeth Iyangar, state director of broadband development, reveals the goals for the new state Office of Broadband Development and Connectivity, which focuses on addressing one issue – broadband availability.

Colored lines on a Tangipahoa Parish map show parish government’s plan for a project to provide fiber routes from a network’s central office to throughout the parish. Service providers would only need to provide the routes between the network and the customer premises.

Veneeth Iyangar, state director of broadband development, reveals the goals for the new state Office of Broadband Development and Connectivity, which focuses on addressing one issue – broadband availability.

It took a pandemic and a busy hurricane season to raise awareness of rural residents’ daily reality without the internet, but more widespread access to affordable broadband access is on the verge of happening in Tangipahoa Parish.

The project was announced Thursday during a luncheon meeting at the Florida Parishes Arena Event Center in Amite. Officials representing a wide range of local government, business and community agencies attended.

Parish President Robby Miller told the audience that Tangipahoa Parish Government proposes to implement a broadband fiber network infrastructure to improve affordable broadband availability and enable expanded high-speed internet access to every unserved and underserved area within the parish boundaries. TCD2, a fiber optic telecommunications company based in Dallas, has been hired by the parish as consultant for the project.

He estimates the project will need between $27-30 million in funding. The money will come from parish resources, strategic partnerships, COVID-19 Relief funding and targeted state and federal broadband funding programs, he said.

The project will involve designing, engineering and constructing an approximately 132-mile Middle Mile fiber network to transport and transmit data communications from a central office to an internet service area, said company Vice President of Engineering Scott Mackinaw. The plan is for high-speed broadband service to pass through some 81 public buildings, he said.

“The big goal is to build a ring around the parish," Miller explained.

This ring will benefit the network and the providers "so if something were to get cut — it’s going to — they still have service,” Miller said. “They don’t have a single line.”

The new plan will put providers along a path to reach all the small communities along the way without having the added expenses of building out the long transport miles, he said.

He stressed that while the plan would be fundable under normal competitive grant bid positions, the COVID recovery dollars and the push for broadband at every level made it a “no brainer.”

Parish government will partner with local service providers to leverage the Open Access Middle Mile network to remove barriers to unserved, underserved and economically depressed areas. Broadband availability for each parish district will be improved to allow expanded economic development opportunities, he added.

“In working with the parish to identify where all those buildings that are critical community facilities, we’ve really focused on making sure we get close enough to serve those guys...," Mackinaw said. "The hardest thing is to get there because there’s hardly any revenue for a service provider to make between this town and that one, but if we can take that problem away, it would be attractive for a lot of people."

Some research of population densities and broadband service locations has already been conducted, but more studies will be done over the course of the project, he said.

Depending on when funding is available and order of priority given from the parish, fiber could be in the ground before the end of the year, Mackinaw said.

Getting the fiber in the ground is a first step, he said. Once there, larger providers could use it to offer 5G and upgrading their service territories will be easier. Wireless enhancement and direct service to homes could be available once the network is built.

Hunter Mcallister, state operations director for Vexus Fiber, a Hammond-based company, said Vexus Fiber has already committed several million dollars to the project, based on the initial plans, and is willing to commit more.

“Our goal is to serve as much of the parish as we possibly can, going into the rural areas,” he said. “We’re already in some of the major areas like Amite and Hammond and Ponchatoula, but we’d love to hit all of those other communities.”

The company gets many requests from Loranger residents, he noted.

The state has created a new office to focus on broadband needs, the Office of Broadband Development and Connectivity. In late February, Gov. John Bel Edwards appointed Veneeth Iyengar to serve as the first state director of broadband development, and Thursday the Amite audience heard from him also.

“To me, what’s important is the fact that the folks here have assembled a great group of people, not only business leaders, but community leaders, elected leaders, school board leaders, library leaders… They all believe in a singular vision that they need to improve high-speed broadband access,” Iyengar said.

"With the enhancement of the CARES Act money and that step forward, we’re at a really sweet spot,” she said. “Now we’ve got to be smart in how we make it actually come to pass.”

Mizell commended Miller’s creative and forward thinking. She predicted this plan will serve as a model for other parishes to follow.