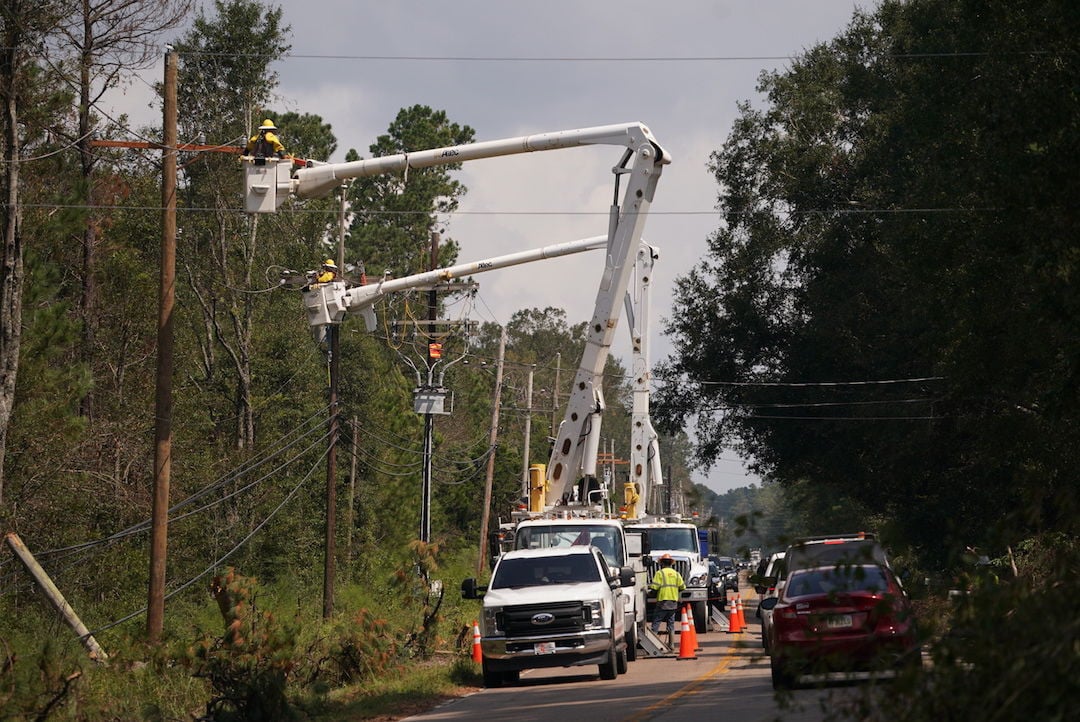 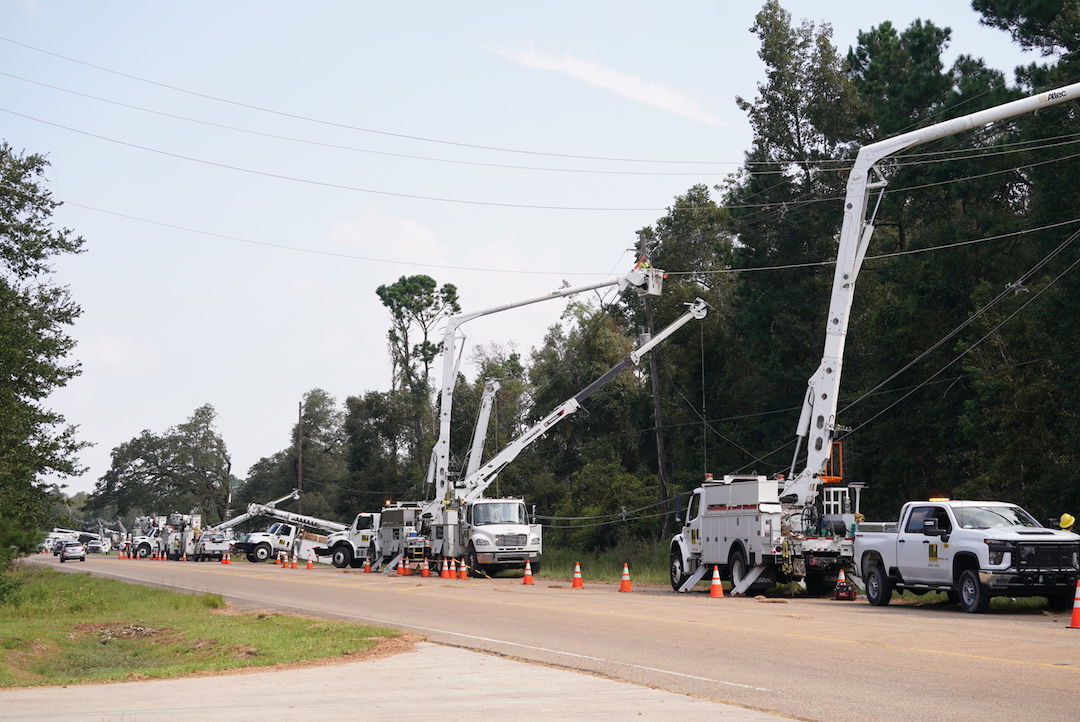 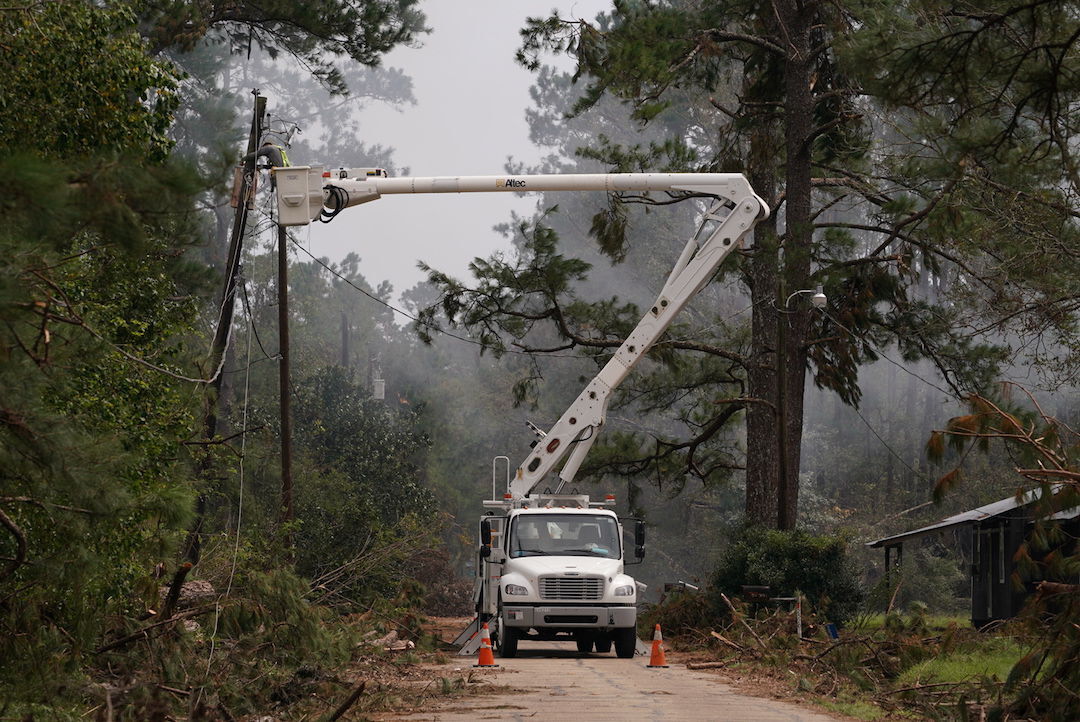 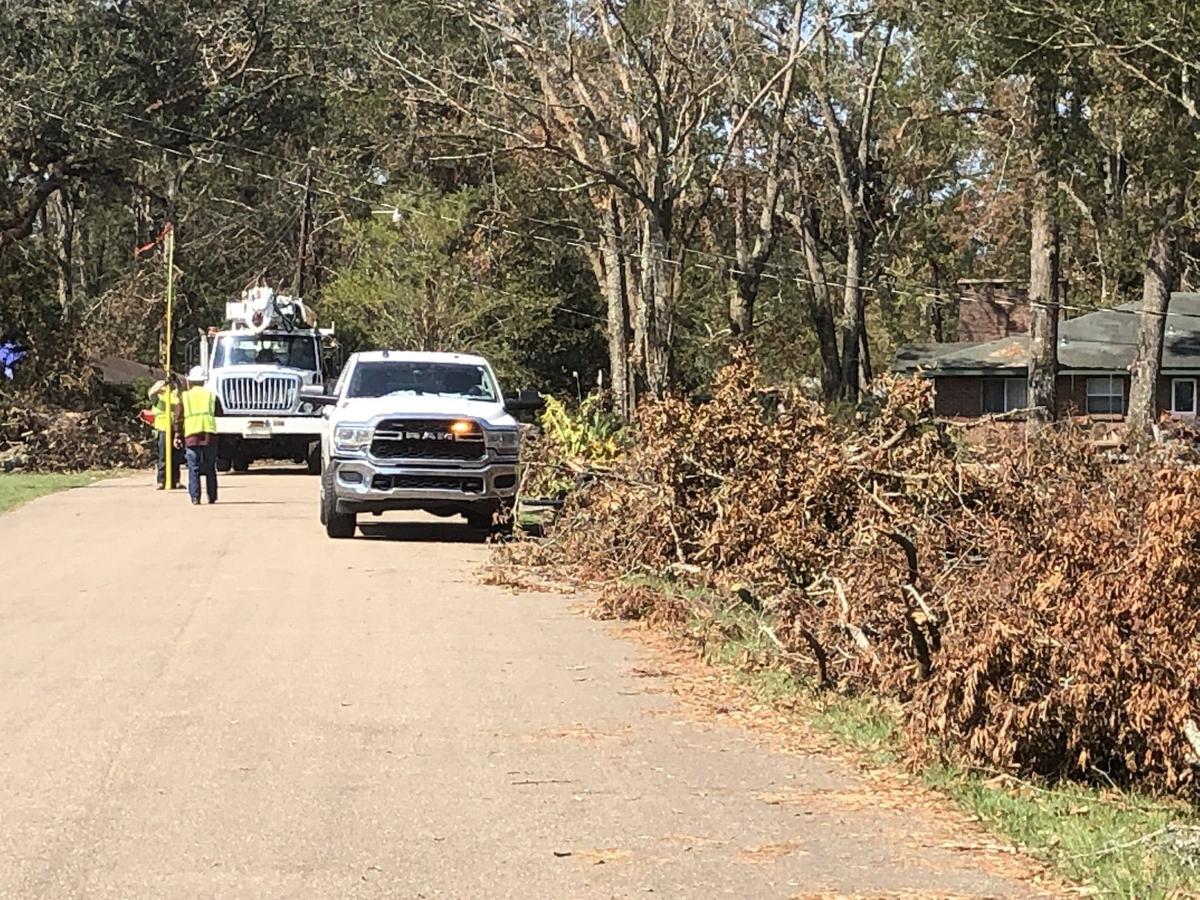 A worker lifts a sagging utility line across West Beech Street across from St. Joseph Catholic Church in Ponchatoula so that a truck can pass through safely.

A worker lifts a sagging utility line across West Beech Street across from St. Joseph Catholic Church in Ponchatoula so that a truck can pass through safely.

Only a third of local Entergy customers remain without power, but the amount of power restoration may soon slow as the company begins focusing efforts on more rural areas in the parish.

As of Friday morning, Entergy was able to decrease the number of customers without power in Tangipahoa and St. Helena parishes to 33 percent, according to the company.

“In Amite, we made repairs on the Interstate 55 crossing and energized most of the feeder down Highway 1054 North and South,” said spokesperson David Freese. “We’re continuing to move resources into the most heavily impacted areas.”

Power has been restored to the Amite lift station.

Freese noted the company is nearing the point in restoration where numbers may not drop as fast as they did earlier in the restoration process.

“Think densely populated city streets versus miles of rural woods where trees and electric equipment are hard to access and repair,” he added.

He stressed the good news of this is that as service is restored in other areas, crews will be shifted to the hardest-hit areas to accelerate restoration where it is safe to do so.

Many of the workers are learning why Louisiana is referred to as the Bayou State as they are working in tough conditions throughout a difficult terrain – heavily wooded areas and marsh and swampy waterways, he said.

“But challenges aside, they’re continuing to give it their all in southeast Louisiana, including in Tangipahoa and St. Helena Parishes,” he said. “We’ll be forever grateful to those who have traveled from afar to help us get the lights back on.”

Freese stressed that while Sept. 17 is the restoration date the company has for some parts of the parish, they are trying to do everything they can to develop alternatives and solutions to beat that projection.

During a radio interview Friday, Hammond Mayor Pete Panepinto said, that like many others, his home had yet to have power restored.

A map of estimated restoration dates for the area can be found online at https://www.entergy.com/userfiles/hurricaneida/North-Shore.pdf

Residents without service in an area where power is restored can call 1-800-9out age to report the outage.

Even if one street over has power, it is possible that another street is on a different circuit or being fed from a different power line, he explained. The issue with the electrical equipment may also be miles away, he said.

Residents are encouraged to check the electric equipment outside their homes, especially in the hard-hit areas, to see if there is any damage to the weather head, the metal pole that sticks out of the pole where the home’s wire goes in. The meter pan should also be assessed for damages.

“Energy manages, maintains and repairs the electric system up to the weather head of a customer’s home,” Freese said.

During the restoration process, Entergy works on what the company is responsible for. This includes rebuilding and repairing primary distribution lines and lateral lines, which are the smaller line segments in neighborhoods. The power company also takes care of service lines that go from the pole to a customer’s line.

In other smaller parts of Tangipahoa Parish, DEMCO continues to work on restoring service to its customers.

According to DEMCO, the circuit that provides service to Pumpkin Center received catastrophic damage from Hurricane Ida. Crews are repairing the line structure for a bank of voltage regulators to the north side of I-12.

DOTD and local authorities will work together to shut down I-12, so DEMCO can make the necessary repairs to the regulator platform line that is down crossing the interstate. There are 55 foot poles on each side, according to the company.

“After the interstate crossing is repaired, nearly every structure will have to be repaired or replaced for the remainder of the four-mile trek across country to Pumpkin Center,” the company reports. “A specialized off-road right-of-way crew has been making its way south toward Pumpkin Center and is reaching 80 percent completion of the right of way reclamation process.”

The company has dispatched a 22-man line crew with off-road equipment to the circuit that is working to make the needed repairs.

Because of challenging terrain and issues that come with it, DEMCO reports that timeline estimation is difficult.

According to the company, “Our track equipment must traverse the right of way, but due to high water and boggy soil conditions delays can amount to hours or days per instance, depending on the circumstances.”’

In eastern Livingston Parish, DEMCO crews are working in the Albany and Holden areas. Many three-phase poles need repair going through Holden north; 43 north of 442 crossroad has been restored. Areas near Hutchison Cemetery Road, Hwy 43 north and Pea Ridge Road had extensive damage and restoration is estimated at Sept. 17. On Hwy. 43 going south the water well is restored and crews are working on Weiss Road going north. Any circuits with large taps are getting energized, but single taps to homes will take more time.