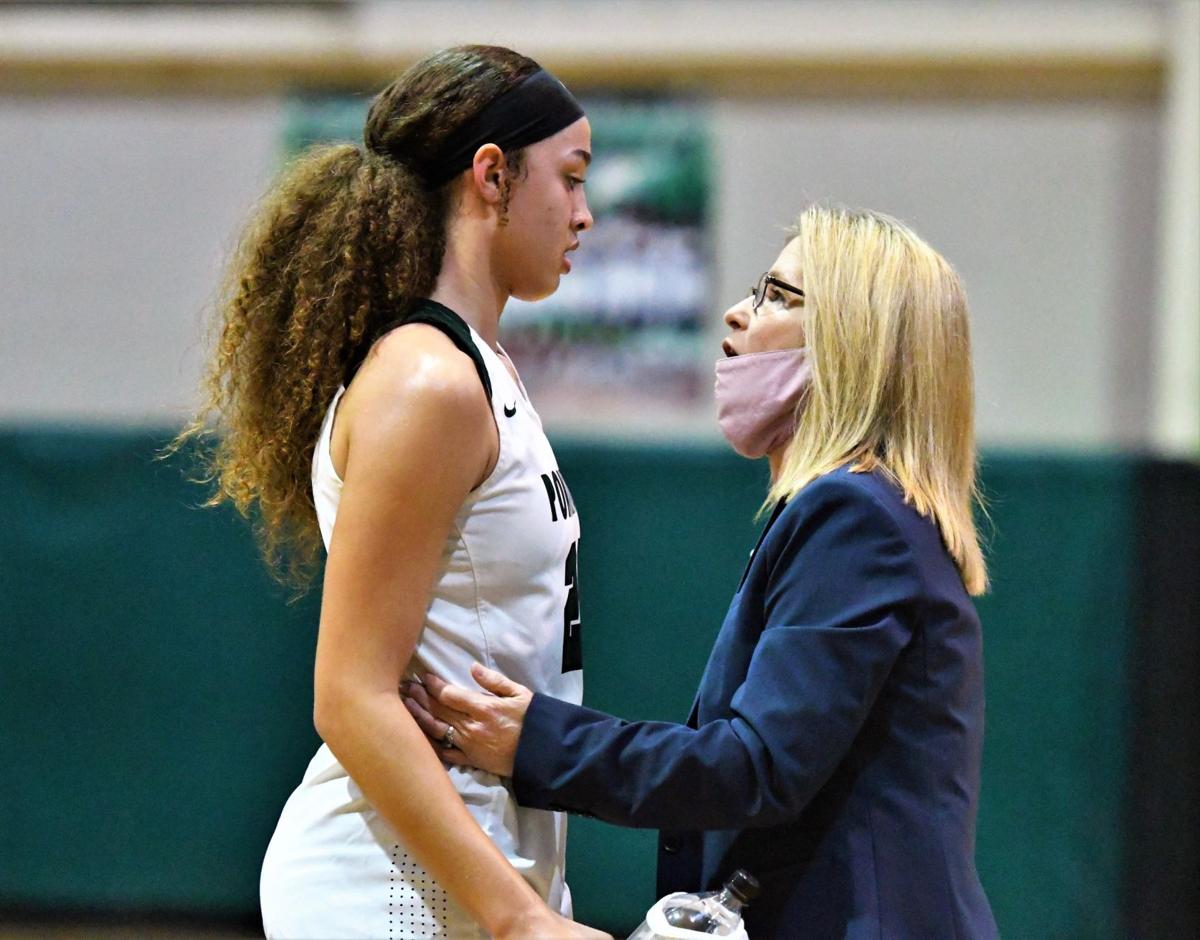 Ponchatoula senior Amoura Graves shares a moment with Head Coach Patricia Landaiche after their quarterfinal win and learning she scored her 2000th career point as a member of the Lady Green Wave. 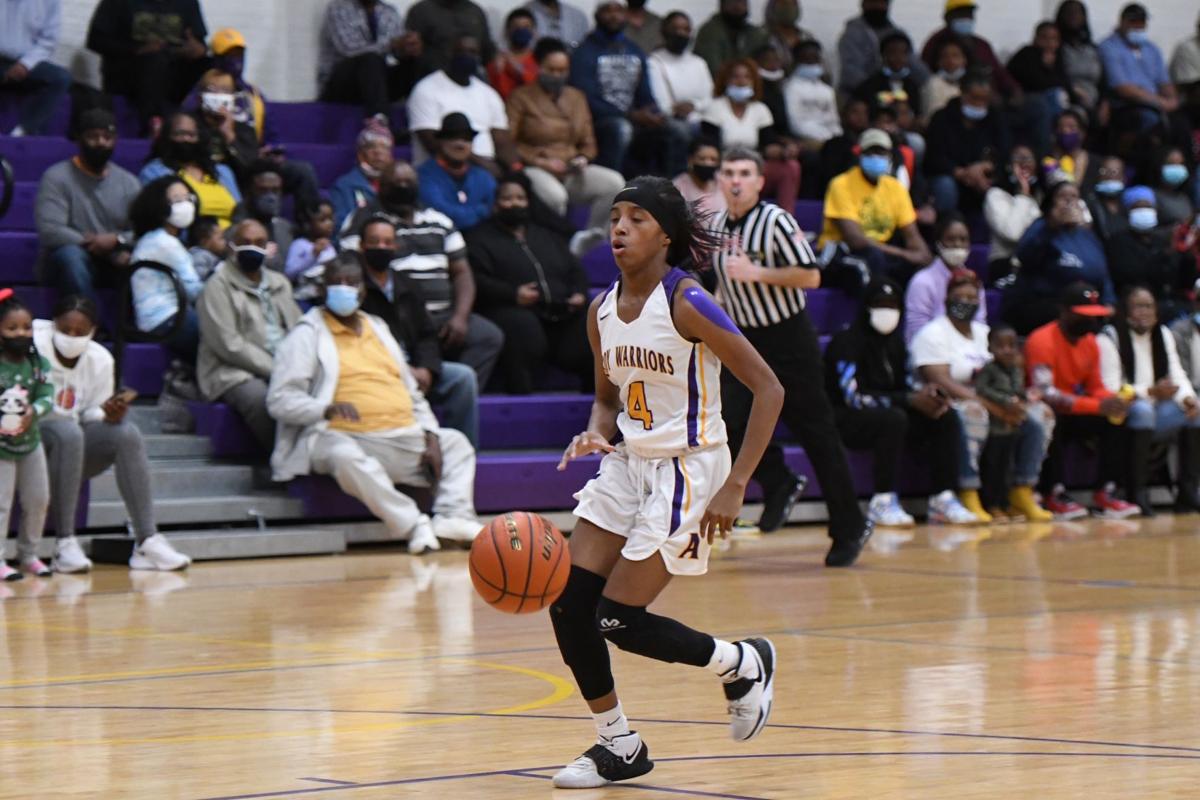 Ponchatoula senior Amoura Graves shares a moment with Head Coach Patricia Landaiche after their quarterfinal win and learning she scored her 2000th career point as a member of the Lady Green Wave.

The top-seeded Ponchatoula Lady Green Wave punched their ticket to the LHSAA 5A Semi-finals Thursday night with a win over Hahnville 65-37. The girls will be in familiar surroundings when they take the floor for Marsh Madness on Wednesday at 7:30 p.m. against No. 12 Benton at SLU's University Center in Hammond.

"We played Benton earlier in the year," said Lady Wave Coach Patricia Landaiche. "They have a guard that's really good. We're going to have to scout her out and evaluate what we do on defense. This is also a well-coached team."

Benton is not just good. They are the defending 5A Champions, and guard Jada Anderson might be small in stature, standing at 5-foot-3, but she is a scoring machine for Benton. Anderson scored 21 points Thursday and got the game-winning layup to go over Parkway and punch a ticket to Hammond. Anderson and her teammates also lost to the Lady Wave 66-49 on Dec. 5 in the Denham Springs tournament and would like to get their revenge. In knowing this, Landaiche explained Friday why her team is taking "no days off."

"We'll work on shooting today and fine tune our defensive press," she said. "We'll ramp it up on Saturday and Sunday and get hands-on before having some walk-throughs on Monday and Tuesday."

Landaiche said her team is looking forward to the championship atmosphere that awaits next week being so close to home. She credits the fans and the community with keeping the team motivated and focused every step of the way.

"The crowd really helped us get through Thursday night and every step before," she said. "Before the last game, it was incredible. All tickets sold out within 20 minutes after they went on sale. People have come excited and hungry, and it's been really great playing in front of the fans."

Nerves were unsettled initially after the tip-off as the Lady Wave found themselves on the wrong end of a 9-0 start and Hahnville ended up with the 20-18 lead after the opening quarter.

"I think it was nerves," Landaiche said. "Of course, they'll tell you they are ready, but you don't really know if you are until you step into the situation. We were down, and I think it scared us. We were missing easy shots and not getting enough pressure."

Landaiche said she subbed Taylor Jackson and Presley Walls into the game in the second and third quarters and threw on a full court press. Point guard Jada Clark also orchestrated traffic and got the team in their offensive sets to score more efficiently. The strategy worked as the momentum swung, Ponchatoula led 38-33 at the half, and Hahnville was held to just 4 points in the second half.

"We really need Jada's ability to set up this offense going down the stretch," Landaiche said. "She got into foul trouble early Thursday and I had to pull her. She's missed when she isn't on the floor because the team goes through her."

In addition to the 15 points combined from Jackson and Walls, mostly on fast breaks, senior Amoura Graves and Jaylee Womack led the offense in scoring with 20 points apiece.

Graves also achieved a milestone by scoring her 200th career point as a member of the Lady Green Wave.

"That kid is so sweet," Landaiche said. "I was rooting for her to reach that so bad, and I kept telling her when she was close. But she would be in situations and she'd pass it off and I'd ask her why. She would tell me that she made a read and found an open shooter and, yes, she'd be right. It would be the right read for her to make. But I could help myself wanting her to reach that milestone. She's a great kid and a great player to coach."

The St. Thomas Aquinas Lady Falcon Basketball team coasted to an 84-41 victory over Holy Savior Menard in a Division III quarterfinal playoff. The win advances the No. 3 seeded Lady Falcons (21-7) to the semifinals where they will face No. 2 Episcopal. The LHSAA will determine where the playing site will be.

Semifinal games are to be played March Monday through Wednesday at either Burton Coliseum in Lake Charles, or at the University Center on the SLU campus in Hammond.

The Girls' Marsh Madness Championship games are slated to be played at SLU on Thursday through Saturday for all Non-select and Select playoff teams.

St. Thomas dominated play against No. 6 Menard. The Lady Falcons used their pressing defense and superior height advantage to out-rebound the Lady Eagles. Offensively, St. Thomas had three players score their season-high in points as the Lady Falcons had their highest point total of the season pouring in 84 points.

“This was a fantastic team win,” said St. Thomas coach Courtney Silewicz. “We came out with energy and played hard. Our defense leads to our offense. We continue to push the ball up the court and shared it and were able to finish.”

St. Thomas raced out to a 14-3 first-quarter lead. SLU signee Jade Brumfield led the charge. Brumfield nailed three 3-point goals in the opening quarter. She finished the first quarter with 17 points and delivered at the foul line hitting eight of nine free throws.

The Lady Falcons ended the first period with a commanding 25-5 advantage. St. Thomas went on a 6-0 run to start the second quarter. Senior Madelyn Nicaud opened the period with a jump shot from the foul line and then junior Breanna Becerra scored on a layup shot off a stolen pass. Menard had four 3-point goals in the quarter, but could not keep pace with the Lady Falcons. Becerra nailed a 3-pointer and later hit a jump shot to make it 45-17. Sophomore Sophia Geisel ended the first half with a layup shot off a steal to make it 47-17. St. Thomas outgunned Menard 22-12 in the second period.

Coach Silewicz emptied her bench with 5:12 left to play in the game with St. Thomas stretching their lead to 72-33. The Lady Falcons outgunned Menard 21-13 in the fourth quarter to make the final 84-41. Brumfield led all scorers with 31 points, including three 3-point goals. Becerra and Bouffard each had season-high 13 points and Nicaud added five points. Geisler, Emily Wells, Caroline Eschete, Luciana Martello, and Abigail Potrament each had four points apiece. Kaitlyn Potrament netted two points for the Lady Falcons.

“We do a good job of making sure everybody gets in there and get an opportunity to contribute,” Silewicz continued. “We want them to get a little bit of playing experience. We are looking forward to the next round.”

Menard was led by sophomore Marilyn Seeling with 23 points, including six 3-point goals. Ellie Juneau followed with nine points, all on 3-point goals. Menard was making its second straight trip to the Division III quarterfinals and ended their season with a 13-19 record.

“My hat goes off St. Thomas. We‘re a young team and they definitely challenged us,” said Lady Eagle coach Britney Rouse. “Where we got killed was obviously on the boards. Our ineffectiveness to play big because were small underneath so that hurts.”

“It was pretty impressive to get back with a young team to the quarterfinal round where you left off. So we need to get over the hump now.” Rouse added.

* No. 1 Doyle to face No. 5 Avoyelles Public Charter on Monday at 5 p.m. in the University Center.