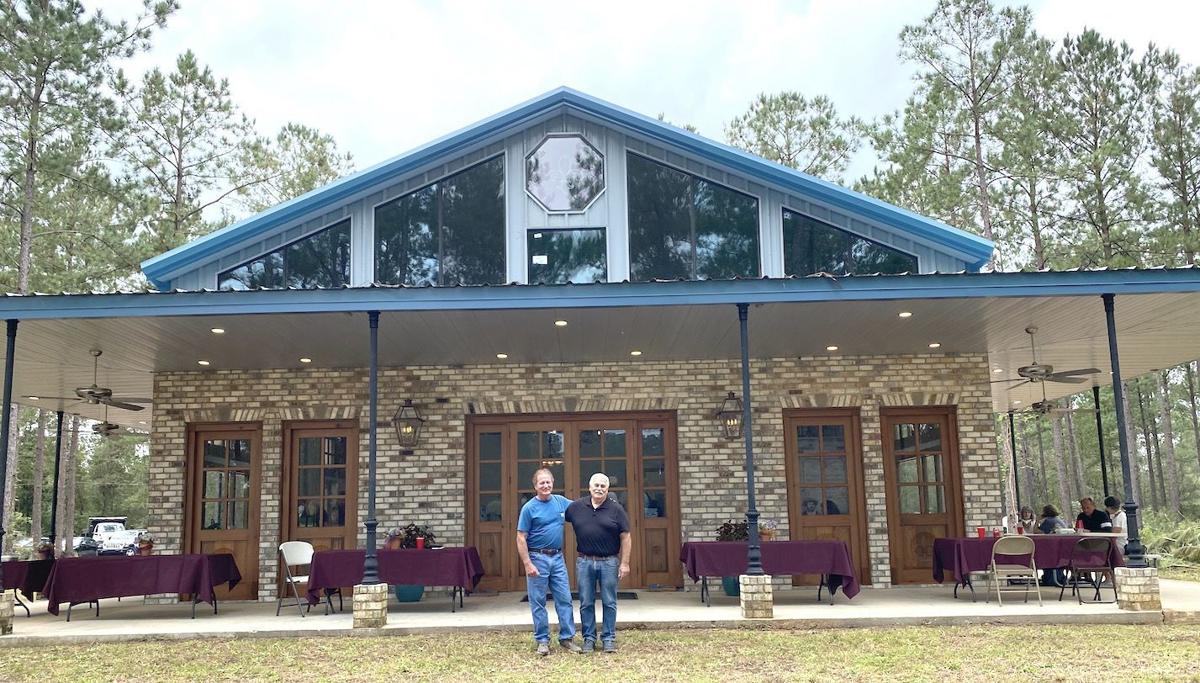 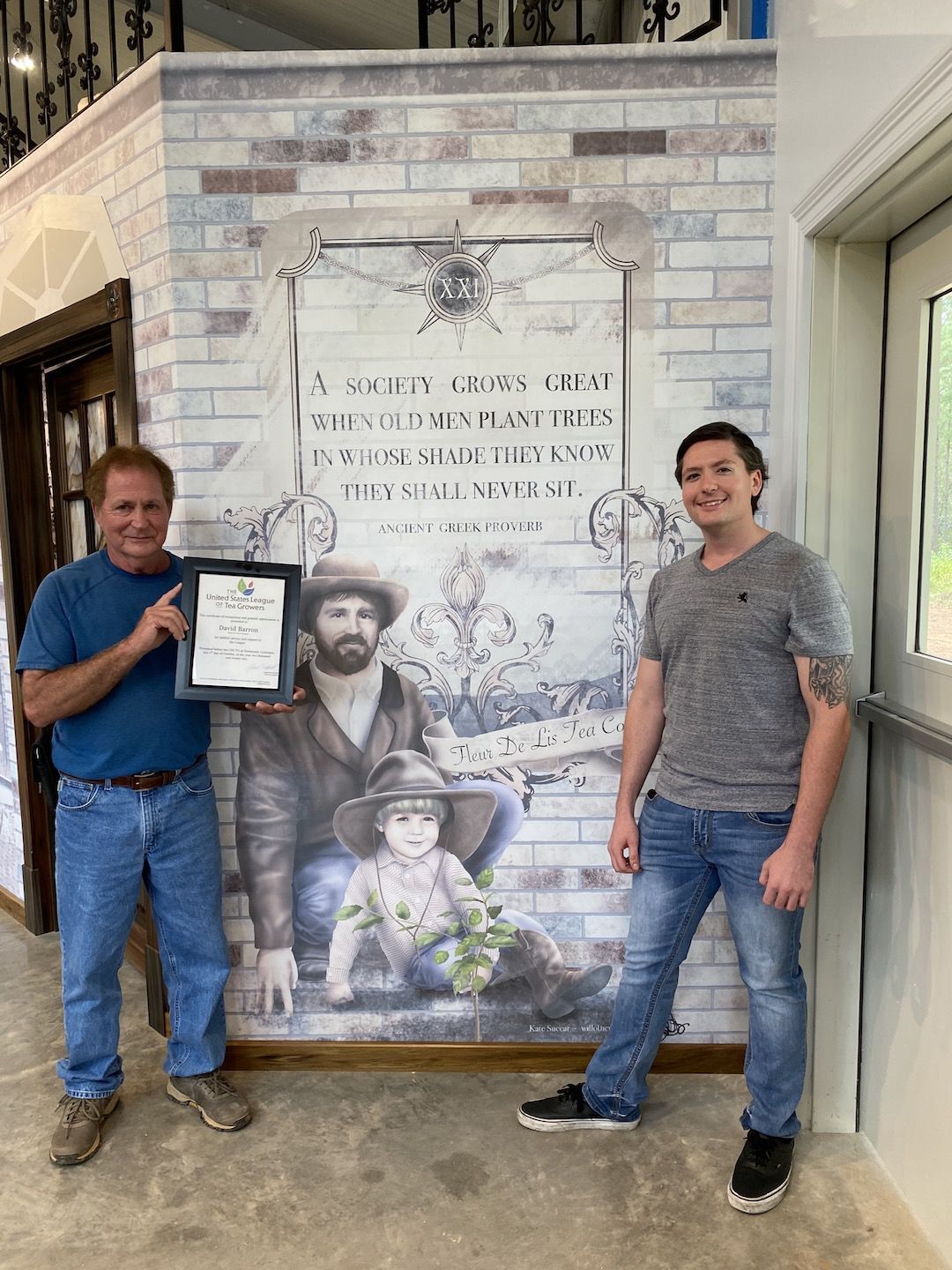 David Barron receives a certificate of appreciation from The United States League of Tea Growers. He and his son, Nathan, are standing in front of a mural featuring a re-creation of their photo together from over 20 years ago. 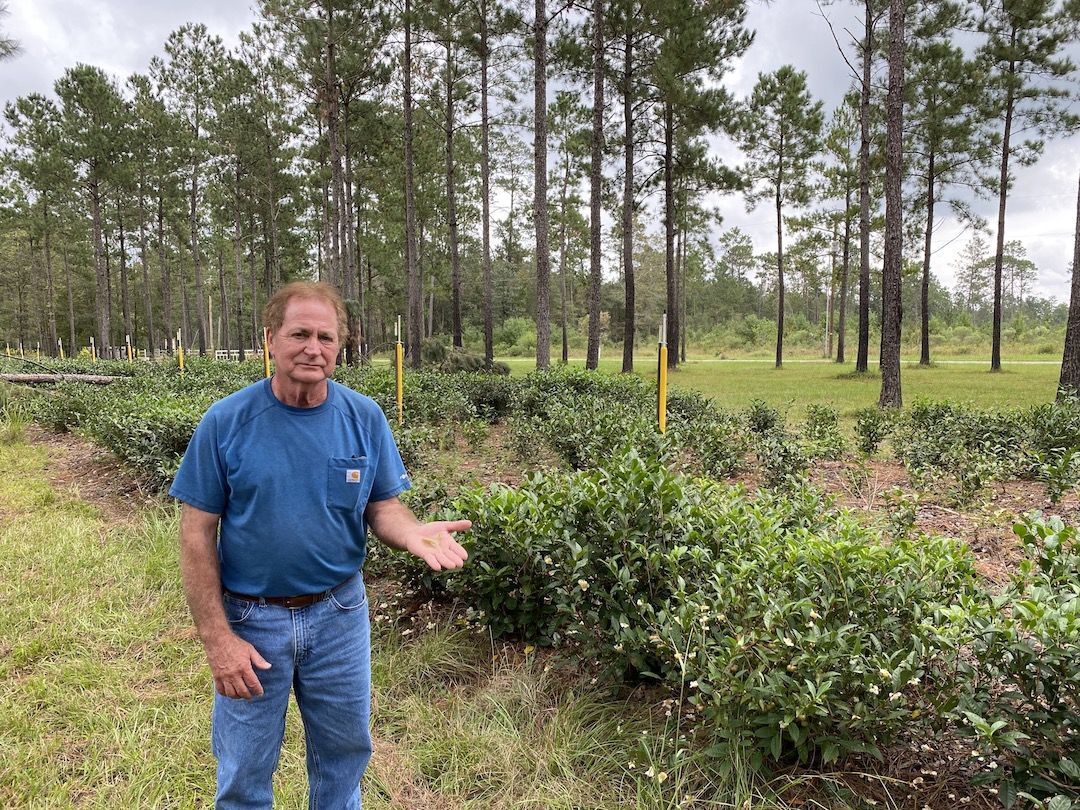 David Barron displays a leaf bud and top two leaves from plants at his farm, which are used to make a variety of teas. 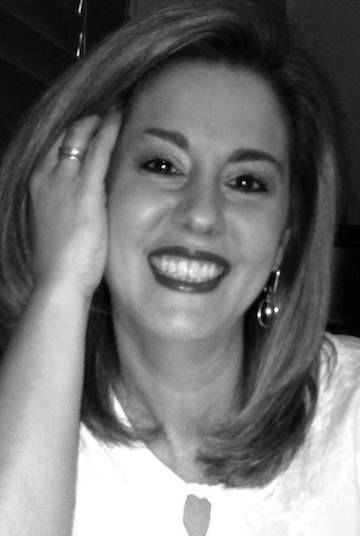 David Barron receives a certificate of appreciation from The United States League of Tea Growers. He and his son, Nathan, are standing in front of a mural featuring a re-creation of their photo together from over 20 years ago.

David Barron displays a leaf bud and top two leaves from plants at his farm, which are used to make a variety of teas.

Among the pine trees in Amite are rows of Camellia plants. These are not the pink flowering Camellia bushes we are accustomed to seeing in our area. Instead, these plants are Camellia Sinensis plants, whose leaves and leaf buds are used to produce tea, including green, black, oolong, and white teas.

For almost three years now, I’ve been hearing about David Barron and his budding tea farm from my Uncle Sal Cali. Because he knows how much I love tea and have been hosting a Mother’s Day Tea Party at my home for over 20 years, my Uncle Sal has been giving me regular updates on the construction of the Fleur De Lis Tea Company’s tea house.

A graduate of SLU and local draftsman, my Uncle Sal has been working with his childhood friend David, as the building designer for the company. Finally, last Saturday, I had the pleasure of touring the building and grounds of Fleur De Lis Tea Company, when the tea farm hosted their first event, The United States League of Tea Growers annual meeting.

By the gracious invitation of David Barron, my Uncle Sal and I were welcomed to sit in on one of the presentations, which was given by Jason McDonald, who owns The Great Mississippi Tea Company, along with Timmy Gipson.

As Jason discussed the various steps in processing tea, I soon learned how temperamental making tea can be. Just the slightest swing in temperature can ruin a batch of tea, Jason said. He explained the pros and cons of using different drying equipment, such as convection ovens, microwaves, and dehydrators, which usually don’t get hot enough to make a flavorful tea.

During this presentation, Ms. Janice Adams served us samples of green teas, which were made using different techniques, one being pan-fired and the other steamed. Not usually a fan of green tea, I was surprised to sip a sweet, delicate blend, a completely different taste than the bitter grocery store variety green tea.

Next, David treated us to a tour of his processing equipment, which included bamboo racks to wilt tea, machines to crush the leaves, a proofer, and a professional dryer. As I enjoyed the aroma of the processing tea, I also met Hans Marchese, who is helping David as manager of Fleur De Lis Tea Company. Together they are currently in the testing phase of the business, which is working on two handcrafted blends, “Nola Noir,” a black tea and “Desire,” a green tea.

Then, we were invited to join the tea farmers for lunch. As I enjoyed a plate of pastalaya, green beans, and bread pudding, I had an opportunity to chat with several other guests, including LSU AgCenter Professor Yan Chen, who has been helping David with growing his tea plants.

Also, I met plant breeder, Buddy Lee. A neighbor to David, Buddy Lee is actually the root of Fleur De Lis Tea Farm. Finding himself with a surplus of tea plants, Buddy gave them to David, who haphazardly decided to plant them under the shade of his pine trees. As it turns out the acidity of that location happened to be the perfect environment to make flavorful tea. Pun intended; the farm grew from there!

Also among the lunch guests were interior designers Earl and Margaret Savoie, who helped incorporate many unique accents to the beautiful custom designed tea house, including a painting, created by Earl, which featured a teacup resting on an armchair under a large oak tree. Also, next to a brilliantly restored sunken cypress door, is a mural created by Austrian artist Kate Succar. This mural includes the re-creation of a photo, taken over 20 years ago of David and his son Nathan, who was a toddler at the time. Above the picture is listed an ancient Greek Proverb, selected by Nathan, which reads “A Society Grows Great When Old Men Plant Trees In whose Shade They Know They Shall Never Sit.”

Before we departed the farm, David took us to tour his rows of plants, and I had the opportunity to see first-hand the appearance of the tender two leaves and leaf bud that is responsible for my favorite drink.

Thank you to David Barron and his wife, Deborah, for the VIP treatment. Touring the Fleur De Lis farm was truly my cup of tea!

Pamela Cali Bankston, R.N., is the published author of the Frizzy Frieda Books and is a board member for the Hammond Regional Arts Center.