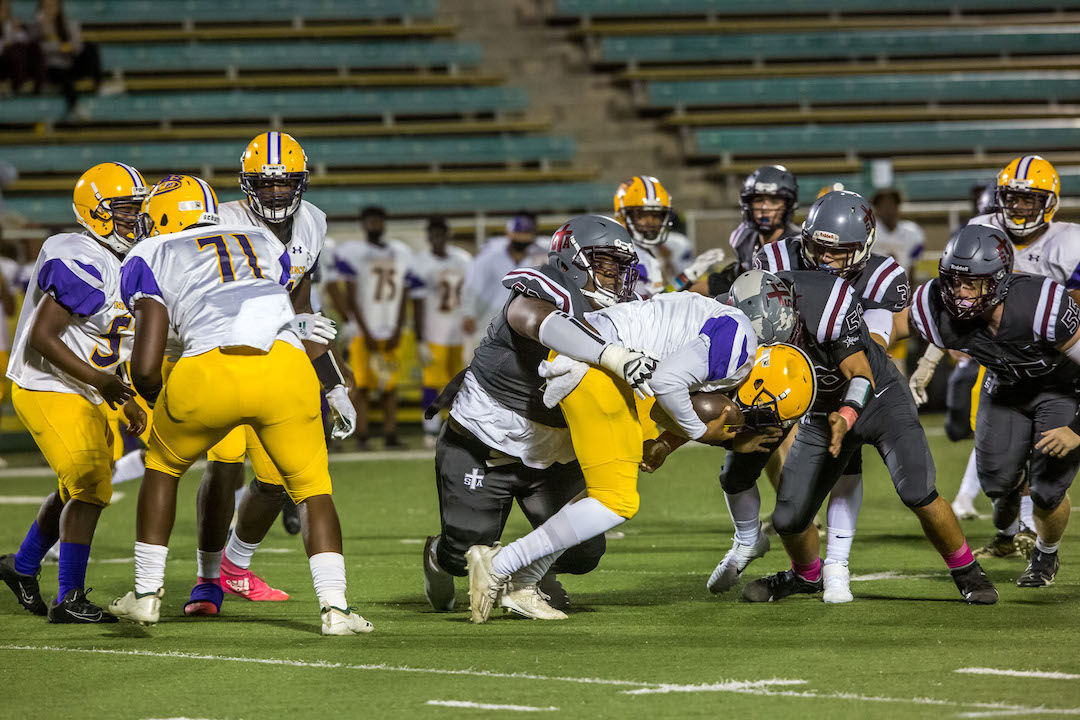 SACK TIME! — STA seniors Kylen Smith and Codee Broom wrap up one of seven tackles for losses in Friday’s homecoming game won by the Falcons 42-18 and hosted at Strawberry Stadium on the campus of SLU. 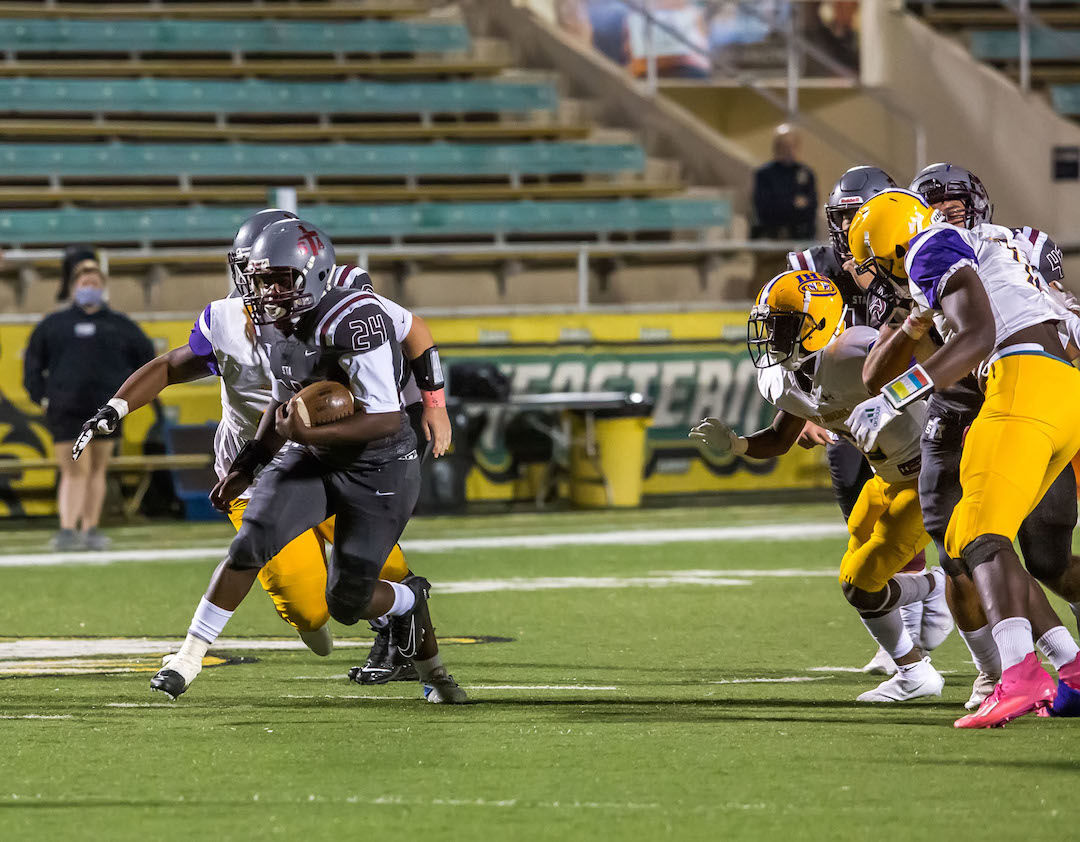 SACK TIME! — STA seniors Kylen Smith and Codee Broom wrap up one of seven tackles for losses in Friday’s homecoming game won by the Falcons 42-18 and hosted at Strawberry Stadium on the campus of SLU.

The St. Thomas Aquinas Falcon football team improved to 2-0 on the season after defeating the winless Independence Tigers 42-18 in its annual homecoming game played at SLU’s Strawberry Stadium.

The Falcons used a punishing ground attack led by quarterback Drew Milton and running back Darius Vaughn as each rushed for over 100 yards and scored a pair or more touchdowns.

“This was a big win for us,” said STA coach Randell Legette. “We wanted to continue to stay focused. The first half I thought we came out on fire, but we just gotta learn how to put our foot on the pedal and keep going.”

The Falcons took their opening possession marching 70 yards in six plays for a touchdown. The drive ended with sophomore Darrius Vaughn breaking a pair of tackles en route to a 22-yard touchdown run. Brayden Leyrer kicked the PAT to give STA a 7-0 lead with 8:22 remaining in the first quarter. Highlighting the drive was a 27-yard gain by Vaughn and a pair of eight yard runs by junior quarterback Drew Milton.

In a second scoring drive, the Falcons marched 65-yards in five plays capped by a 23-yard touchdown run by Vaughn. Leyrer added the PAT to make it 14-0. The key play in this drive was a Milton to Chase Daigle pass of 16 yards putting the football at the Independence 22-yard line.

The Tigers returned the ensuing kickoff as Dunyell Barton ran down the sideline 71 yards before being tripped up at the Falcon nine yard line.

Three plays later, Independence got on the scoreboard with a three yard touchdown run by quarterback Kendel Haywood. The PAT was blocked by St. Thomas leaving the score 14-6.

A pass interception by Milton set up the Falcons’ next touchdown score. Drew Milton picked off a Kendel Haywood pass attempt at the Tiger 40 and returned the ball to the Indy 24.

On the very next play, Vaughn scored his third touchdown of the game run on a 24 yard run. Leyrer booted the PAT to give St. Thomas a 21-6 advantage entering the second period.

Independence committed its second turnover when a Haywood pass attempt was tipped up in the air by junior defensive end Nunzio Martello and junior Braden Moore came down with the ball before it hit the turf giving the Falcons possession at the Indy 43.

However, St. Thomas gave it right back when Milton’s pass attempt was intercepted by Shandon Vernon of Independence and he returned the ball to the Falcon 18.

The Tiger defense forced St. Thomas to punt the ball for the first time on its next possession. However, the Falcon defense got it right back two plays later on a fumble recovery giving STA the ball at the Tiger 23.

St. Thomas could not capitalize on the turnover giving the ball up on downs when Milton threw incomplete on a fourth down pass play.

Independence put together a eight-play drive reaching midfield. But the Tigers gave up the ball on downs when Martello tackled Vernon short of first-down yardage. STA took possession at their 49 with less than a minute remaining. A bad snap from center gave STA a 14-yard loss as time expired ending the first half.

In the third quarter, the Falcons were able to sustain a eight-play, 66-yard drive that was culminated by a eight yard touchdown run by Milton. Leyrer kicked the PAT to give STA a 28-12 lead. Highlighting the drive was 23-yard run by Vaughn and a 16-yard scamper by Milton that moved the football to the Independence eight-yard line.

St. Thomas marched 85 yards in seven plays that resulted into a six-yard touchdown run by Milton. Leyrer added the PAT to make it 35-12. The key plays in the drive were a pair of runs by Vaughn of 26 and 12 yards and Milton had a 17-yard run that moved the ball to the Indy 38. Independence coach Scott Shaffett was flagged twice for arguing a call by the officials stepping on the field of play and was tossed from the contest with 5:05 left in the quarter.

Following a Tiger punt, STA marched 68 yards in 11 plays for its final touchdown of the game. The drive ended with Milton scoring his fourth TD of the game on a four-yard touchdown run. Leyrer booted the PAT to make it 42-12.

“These kids have bought into the program. I’m really proud of them to this point,” Legette said. “We just got to get really prepared for Newman where it’s going to be a tough challenge. Tonight, we wanted to establish the run. That was our goal and we were able to do that throughout the game.”

Independence scored its final touchdown late in the game when running back Fred McDowell rambled down the sideline on a 42-yard score. The two-point conversion failed making the final score 42-18 with 1:31 left to play. The loss left Independence with an 0-3 record.

St. Thomas will take on Isidore Newman School in New Orleans in a non-district contest Friday.