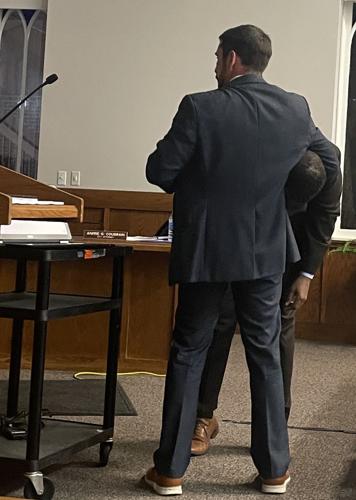 Use-of-force expert Seth Stoughton demonstrates a guillotine choke on attorney Michael Adams at the Hammond City Council meeting Tuesday during Stoughton’s report on his findings from a 2017 booking room incident at Hammond Police Department. Stoughton listed the choke among the “unreasonable” tactics officers used during the incident. 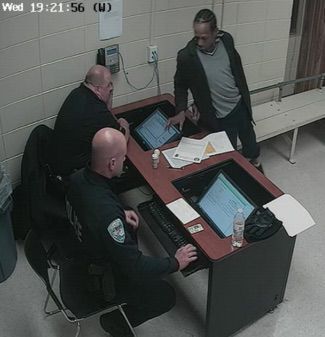 A still from video footage shows Kentdrick Ratliff reach for a bottle of pills while he was awaiting booking in Hammond Police Department, as Edwin Bergeron, now the police chief of Hammond, and officer Craig Dunn sit at the desk. 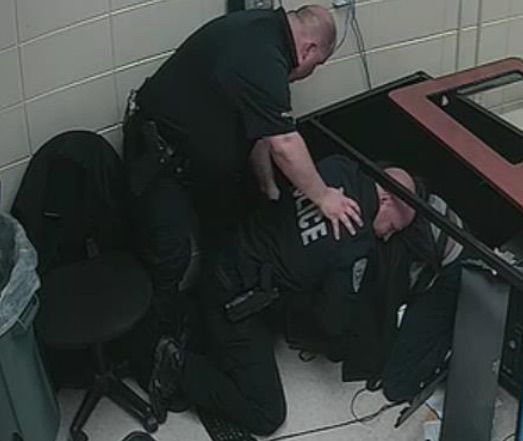 A still from video footage shows Edwin Bergeron, standing, and Craig Dunn, kneeing, as they subdue Kentdrick Ratliff, a man who had been brought into the station for booking.

Use-of-force expert Seth Stoughton demonstrates a guillotine choke on attorney Michael Adams at the Hammond City Council meeting Tuesday during Stoughton’s report on his findings from a 2017 booking room incident at Hammond Police Department. Stoughton listed the choke among the “unreasonable” tactics officers used during the incident.

A still from video footage shows Kentdrick Ratliff reach for a bottle of pills while he was awaiting booking in Hammond Police Department, as Edwin Bergeron, now the police chief of Hammond, and officer Craig Dunn sit at the desk.

A still from video footage shows Edwin Bergeron, standing, and Craig Dunn, kneeing, as they subdue Kentdrick Ratliff, a man who had been brought into the station for booking.

Over a year after Hammond City Council hired an investigator to review a booking room beating at Hammond Police Department, the council and a packed audience heard a report which could spell trouble for the police officers involved.

A video of the beating, which was leaked in summer 2020, shows several officers punching, kicking and choking a handcuffed Black man after he reached for a pill bottle on a desk while they were booking him in December 2017.

Michael Adams, a Baton Rouge attorney, and Seth Stoughton, a former officer and use-of-force expert who was hired to investigate the incident, walked the council through their analysis of the violence and concluded that eight of the 10 acts of violence were either “unreasonable” or “egregiously unreasonable.”

The pair recommended the council turn the case over to state and federal prosecutors and issue a comprehensive review of HPD officers and operations.

“It is not uncommon that if there is one use-of-force issue that has come to light, there are others that have not come to light yet,” Stoughton said.

During the beating, several officers who were not initially involved watched now-Chief Edwin Bergeron and officer Craig Dunn kick Kentdrick Ratliff, who was arrested for drug possession at a traffic stop. The other officers in the room did not intervene. Some joined in, kicking and restraining a handcuffed Ratliff.

“The department does not have an intervention policy,” Stoughton said. “It is my recommendation that it should implement one, so officers have to stop unreasonable uses of force like these.”

He said police are “allowed to use force to address imminent threats, but irritation and frustration do not warrant force.” He added that when a threat is present, the use of force should be proportional to the threat.

The findings concluded Ratliff posed no threat, and the beating was “excessive and unreasonable” after investigators conducted interviews and reviewed officer reports and the video.

Stoughton laid out the following 10 use-of-force tactics from the booking room incident:

When Ratliff reached for the bottle, Bergeron struck his face and body six times, and Dunn struck him three times.

Dunn kicked Ratliff’s neck as one of his handcuffs came off.

Bergeron struck Ratliff’s left side with his knee. Stoughton said this was one of two reasonable uses of force in the incident.

When Ratliff was back in handcuffs and lying face-down on the floor, Dunn and officer Thad Gautier restrained him for a prolonged period of time. Officers called a “Code 4,” which means the situation is under control, but they continued to forcefully restrain him as he yelled, “OK! OK! I’m not moving!”

Officer Storm Tabor tasered Ratliff’s back, the second reasonable use of force.

Gautier grabbed Ratliff’s hand and pulled it down, hyperflexing his wrist while his hands were in cuffs and stretched behind his back.

Dunn placed his knee on Ratliff’s neck for a prolonged period of time, a position that is not approved as a control technique. It is a transitory position, but it can sever the spinal column if used for too long.

Officer Thomas Mushinski walked into the booking room and kicked Ratliff in the groin or thigh while Gautier was restraining Ratliff.

Lastly, Dunn kicked his foot backwards into Ratliff’s head five times. Stoughton called this “among the most abusive uses of force (he’s) seen.”

The investigation found that Dunn omitted most of the uses of force in his report of the incident. In an interview, Dunn said Ratliff rolled on top of him and reached for his handgun, pulling the grip and holster. Stoughton said this was found to be untrue, as the video showed Dunn’s gun far out of Ratliff’s handcuffed reach.

No other officer documented the incident, which is out of compliance with HPD policies. A witness added that Bergeron said not to document the incident, Stoughton said.

Former Chief James Stewart opened an Internal Affairs investigation into Mushinski’s use of force, but Stoughton’s investigation revealed that relevant witnesses were not interviewed, and the interviews that did occur involved leading questions.

Among some of his other allegations: officers do not consistently understand the handcuff policy in the booking room, an inmate committed suicide while officers failed to properly supervise, the department covered up an officer’s involvement in an off-duty altercation, the department engaged in racial and gender discrimination, Bergeron allowed on-duty officers to supervise a private event, and Mayor Pete Panepinto was inappropriately involved and practiced “favoritism” in the department.

Stoughton and Adams offered the council 17 recommendations, including referring the incident to authorities to determine if any HPD employees committed a crime, conducting a review of the department and targeting investigations into the allegations.

After Stoughton’s presentation, Councilman Devon Wells asked if the officers involved in the incident are still working for the city. Stoughton, along with several members of the public audience, answered “yes.”

Neither resolution made it to the agenda, as Council members Carlee White Gonzales and Steve Leon voted against the additions. A vote to add agenda items requires unanimous approval.

“We have an agenda for a reason,” Gonzales said. “We can put them on the next agenda, but I need time to review the report.”

“There shouldn’t be much else to review,” he said. “This is a disturbing and disgusting video. He made awful sounds…and then to promote that guy (Bergeron) after knowing this is…very sad.”

The council voted Bergeron to be chief of the department before the video of the beating incident surfaced, but Wells said he felt mayoral pressure to do so.

The council spent approximately $60,000 from the city for the investigation. The members can either accept the report’s recommendations or choose to do nothing with them, as it was not a disciplinary investigation.

Panepinto, Bergeron and the city spokeswoman did not respond to requests for comments on Wednesday.