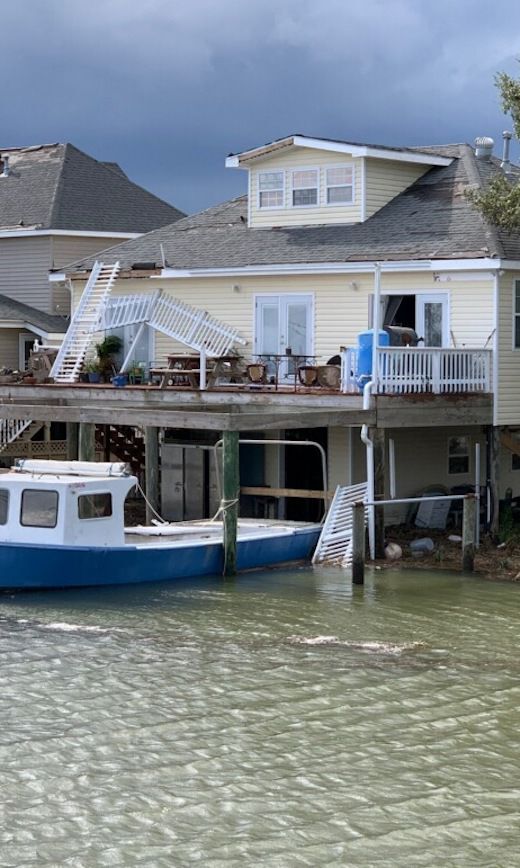 Stacia Johnson’s house is damaged after Hurricane Ida. Her crab boat is underneath her dock. 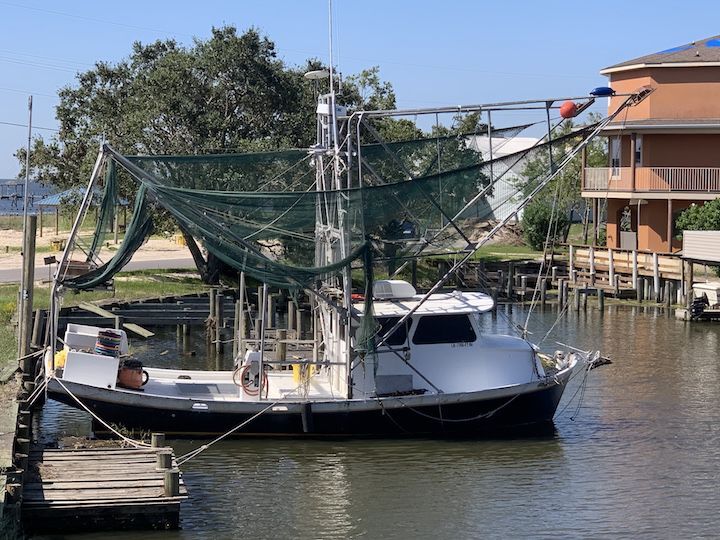 This is Barry Labruzzo’s shrimp boat that he and Justin Smith use for trips of up to five days. 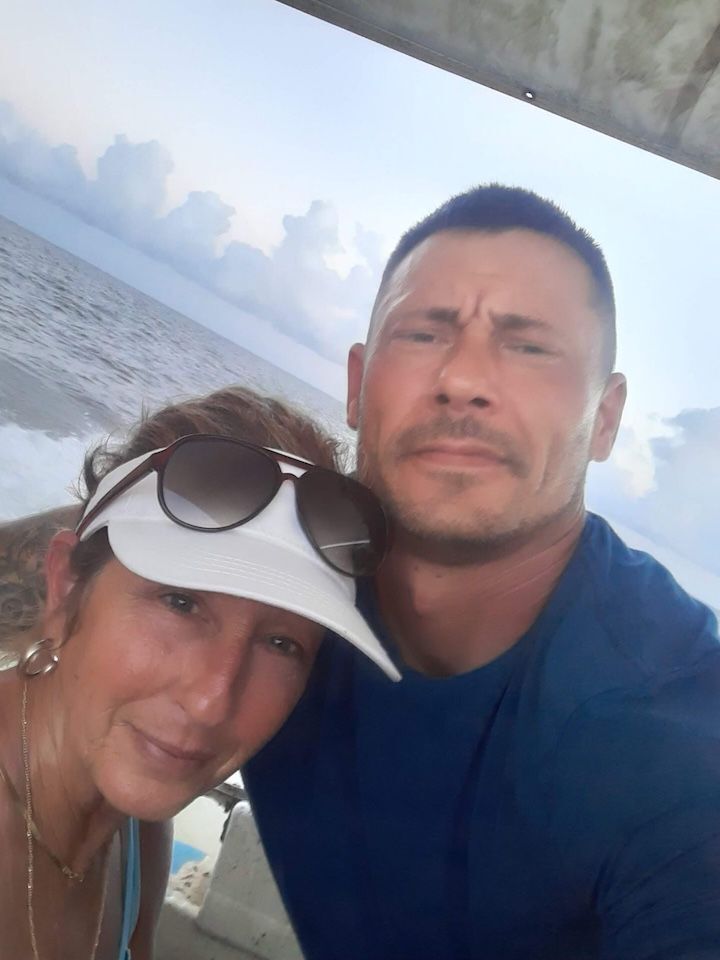 Siblings Justin Smith and Stacia Johnson are shown on a boat on Lake Pontchartrain. 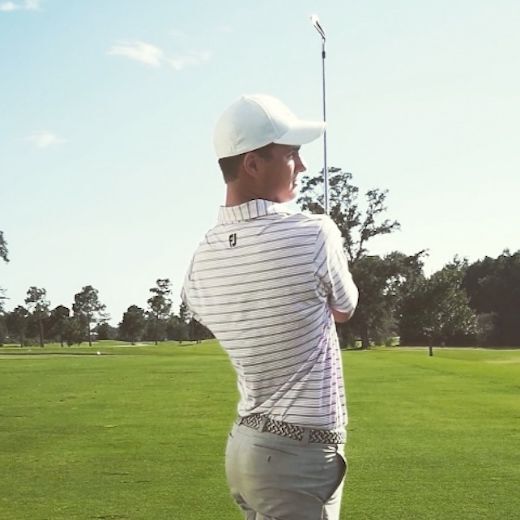 Michael Terblanche, then a golfer at McNeese State University, was displaced by Hurricane Laura and later transferred to the University of Missouri.

Stacia Johnson’s house is damaged after Hurricane Ida. Her crab boat is underneath her dock.

This is Barry Labruzzo’s shrimp boat that he and Justin Smith use for trips of up to five days.

Siblings Justin Smith and Stacia Johnson are shown on a boat on Lake Pontchartrain.

Michael Terblanche, then a golfer at McNeese State University, was displaced by Hurricane Laura and later transferred to the University of Missouri.

As Hurricane Ida rapidly grew in strength, crabbers Stacia Johnson and Justin Smith of Slidell were left with just three days to relocate their $100,000 supply of crab traps.

Knowing the traps could be severely damaged or stolen if left on land, the siblings dropped their traps in the Biloxi Marsh, said a prayer and evacuated to Arkansas. Days later, unsure how many traps would be left, they found that not only were all of the traps intact, but they were also filled to the brim with crabs.

Johnson called the event a miracle in a string of unfortunate events due to the worsening effects of climate change.

Rising water temperatures, disappearing islands and rapidly changing salinity levels have severely altered their fishing routes and the migration patterns of the crustaceans they catch. These changes have significantly hindered their success as commercial fishers.

The Johnson-Smith family is not alone. As ocean temperatures rise, hurricane seasons become longer and more intense, and residents across the state are being forced to face the existential threats of the climate crisis.

Since the catastrophic damage from Hurricane Katrina in 2005, people across South Louisiana have faced greater anxiety about what could happen next. And the damage from Hurricanes Ida and Laura has turned that anxiety into dread, once again prompting families who have lived here for generations to reconsider calling Louisiana home.

Dr. George Xue, a marine science professor at LSU, said the Gulf of Mexico is a great conductor of energy for “monster storms,” or hurricanes that reach categories four or five.

Xue said that with rising sea levels and warmer ocean temperatures due to climate change, Louisiana will begin to see more hurricanes that will gain power fast and become even more unpredictable than the five major ones that hit the Gulf region over the past five years.

“There will be no safe harbor from major hurricanes in the Northern Gulf,” Xue said.

A new survey, led by LSU geology professors, of 2,780 scientists studying climate change shows that 91 percent of them believe that the Earth is warming because of human-related greenhouse gas emissions. Although this number has risen by 10 percentage points since 2009, according to the Pew Research Center, fewer than half of Americans believe that humans are causing climate change.

And while two-thirds of Baton Rouge residents surveyed by a local foundation agreed recently that the weather is becoming more extreme, they were split along partisan lines about whether climate change was the cause.

To Stay or Leave?

Dr. Michael Castine and his wife Brigette have lived in Baton Rouge for 22 years, and Michael was born and raised in New Orleans. Due to hurricanes, freezes and floods in recent years, the Castines have begun preparations to move to Texas in the coming years.

This exodus out of state is uncommon in Louisiana. The Castines said that with large families and a predominant Catholic culture, many people tend to stay and work and live where they grew up in. Out of Dr. Castine’s entire family, he was the only one to leave New Orleans.

“People from New Orleans in particular might go temporarily but will always return,” Brigette said. “I didn’t understand how after Katrina people would want to move back, but they did. They could not wait to go back and rebuild.”

Beth, a nurse, and Todd, an attorney, have lived in New Orleans their entire lives, and before Katrina, they were reluctant to evacuate for storms. Katrina forced them to move away for four months with their three children, and after returning home, they had to cook dinner in a microwave in the laundry room while they rebuilt the ground floor.

Now they are quick to evacuate if there is any chance a storm will hit New Orleans, but they also are adamant they would never move given their family ties and identity of being from New Orleans.

“I hope we’re a family of faith, and that will help us through anything,” Todd Lacoste said.

Some people new to the state also have experienced the hardships.

McNeese State University soccer player Alexis Miller and Michael Terblanche, who was then a golfer at McNeese, were displaced from Lake Charles for months after Hurricane Laura made landfall in 2020. Both returned to find damaged apartments, buildings and athletic facilities.

“Driving into Lake Charles was almost like driving into a warzone, to be honest,” Terblanche said. “Trees that you’d seen and gotten used to driving around were not there anymore. Houses were torn to shreds.”

Terblanche, who is from South Africa, had never experienced a natural disaster like that. He said the kindness he experienced from Louisianians after the storm was incredible, but when McNeese canceled its golf program, he transferred to the University of Missouri. He said the constant fear of losing a home was too much for him to consider returning to Louisiana after college.

Hurricane Laura displaced Miller for six months. She described a chaotic housing market when she returned from her parents’ home in North Carolina and a race against the clock for her and her neighbors to find a home repaired enough to live in as prices skyrocketed.

She slept on a teammate’s couch while she waited, which she said was “perhaps the hardest part, mentally.” Miller stayed at McNeese, but “now with every weather event, I’m convinced it’s coming here,” she said with lament.

Climate Change and the Fishing Industry

Stacia Johnson, 54, has lived on Lake Pontchartrain in Slidell since she was a child, and a typical day revolves around her 18-foot crab boat. Johnson accompanied her father on fishing trips, and now she and her son Mark speed around the marshes dropping and pulling crab traps. They separate males, females, hard-shell crabs and softshells.

The catching process for softshells is intricate; they are attracted to a specific water temperature and salinity. Once they are caught, they need to be kept on ice to prevent them from regenerating their shells.

“We’ll be running 37 mph on the boat and come into huge three-mile stretches of dead fish,” Johnson said.

Her brother, Justin Smith, spends his days on a 38-by-16-foot shrimp boat. Barry Labruzzo, Smith’s longtime friend and coworker, and his one-eyed pit bull named Duke, venture out with Smith on fishing trips, which can last up to five days.

Their boat, named Madison Alexis after two of Labruzzo’s daughters, houses bunk beds, a kitchen and a shower beneath a remarkably complex system of ropes, nets and pulleys that they use to haul in sharks, shrimp, crabs and a plethora of other sea creatures that the bayou has to offer.

Since the BP Deepwater Horizons oil spill in 2010, burnt crab shells, two-headed shrimp, fish with no eyes and animals with tumors have become much more common. Researchers and fishers alike attribute these deformities to the dispersant chemicals released to combat the oil spill.

For Hurricane Ida, Labruzzo and Smith tied the boat to a tree to keep it upright against the wind gusts and pounding waves. They were yet again forced to acknowledge the devastating power that the weather, including the almost-daily summer thunderstorms that blast wind and waves at their boat on each fishing trip, have over their livelihoods.

“You gotta have a high tolerance to be out here,” Labruzzo said. “When it comes to the weather, a lot of people would be bothered. You just gotta deal with it.”

Still, these fishers have no qualms about trying to maintain their livelihoods despite climate change.

Labruzzo’s 14-year-old daughter Morgan often goes out with him on fishing trips. She is already skilled at constructing crawfish traps, and she can climb and operate the various rope and pulley systems that appear foreign and nonsensical to the inexperienced shrimper. She plans on following her father into the fishing industry, creating another multi-generational fishing family in Southeast Louisiana.

Just as her father taught her, Johnson has taught the next two generations of her family how to fish as well.

“Fishing is our way of life, and despite the challenges,” she said, “I can’t expect my family to change what’s been in our blood for years.”