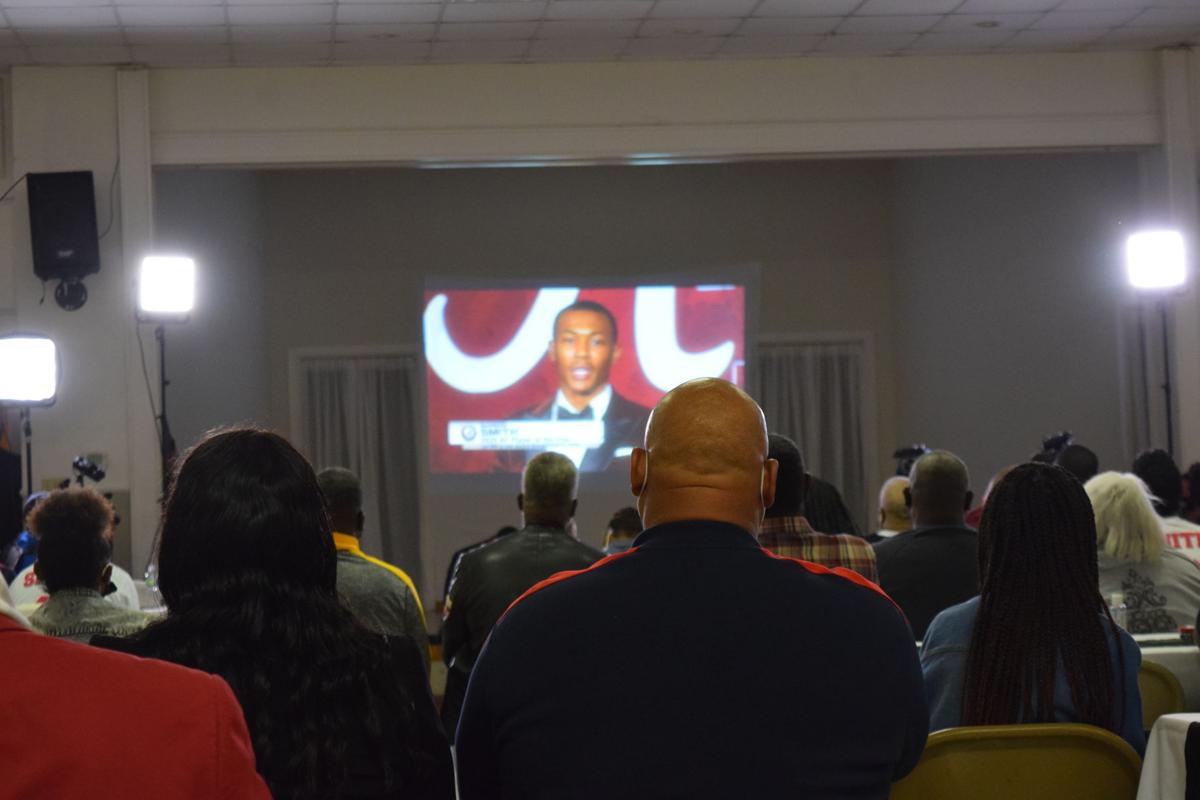 Proud Amite residents gaze at a projection of the ESPN broadcast when DeVonta Smith’s biography is featured on Tuesday night. Smith is the first wide receiver to earn the award since 1991. 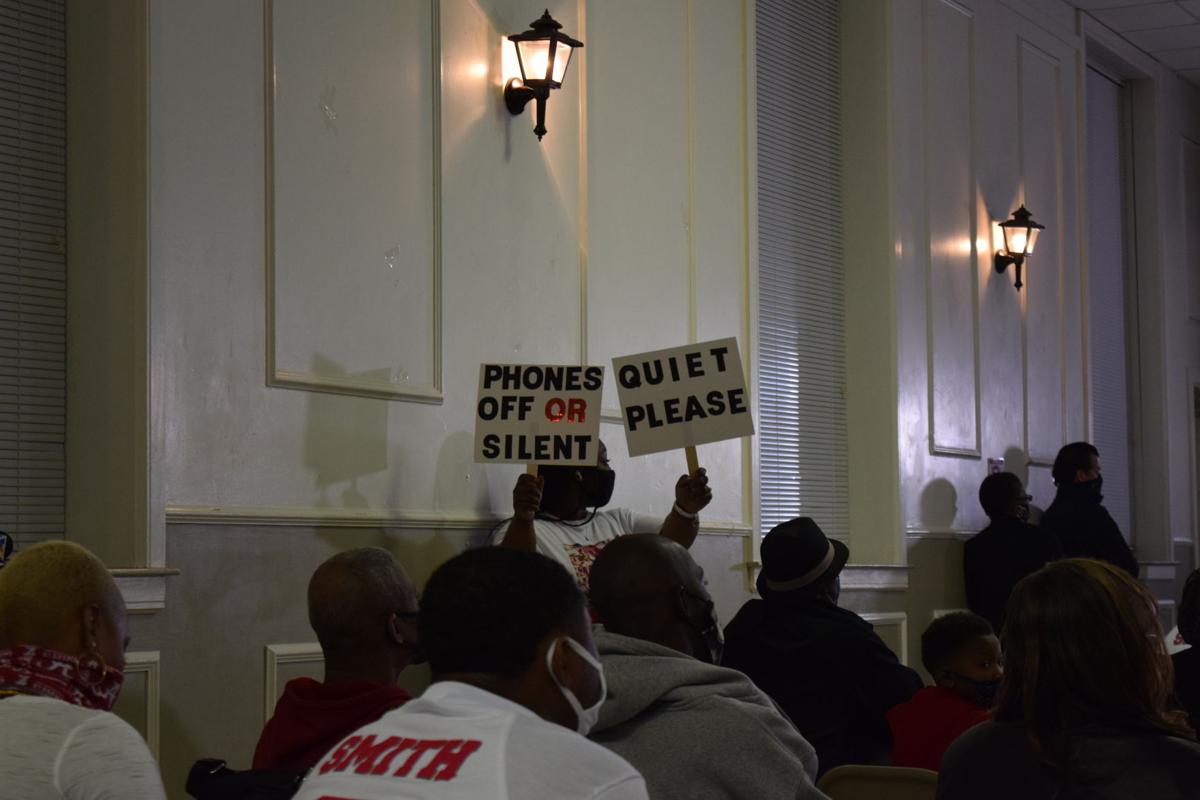 HELPING – Friends and family who organized the invitation-only Heisman watch party volunteer to help ESPN’s television crew by holding a sign, telling the audience to silence their phone and stay quiet during the broadcast. 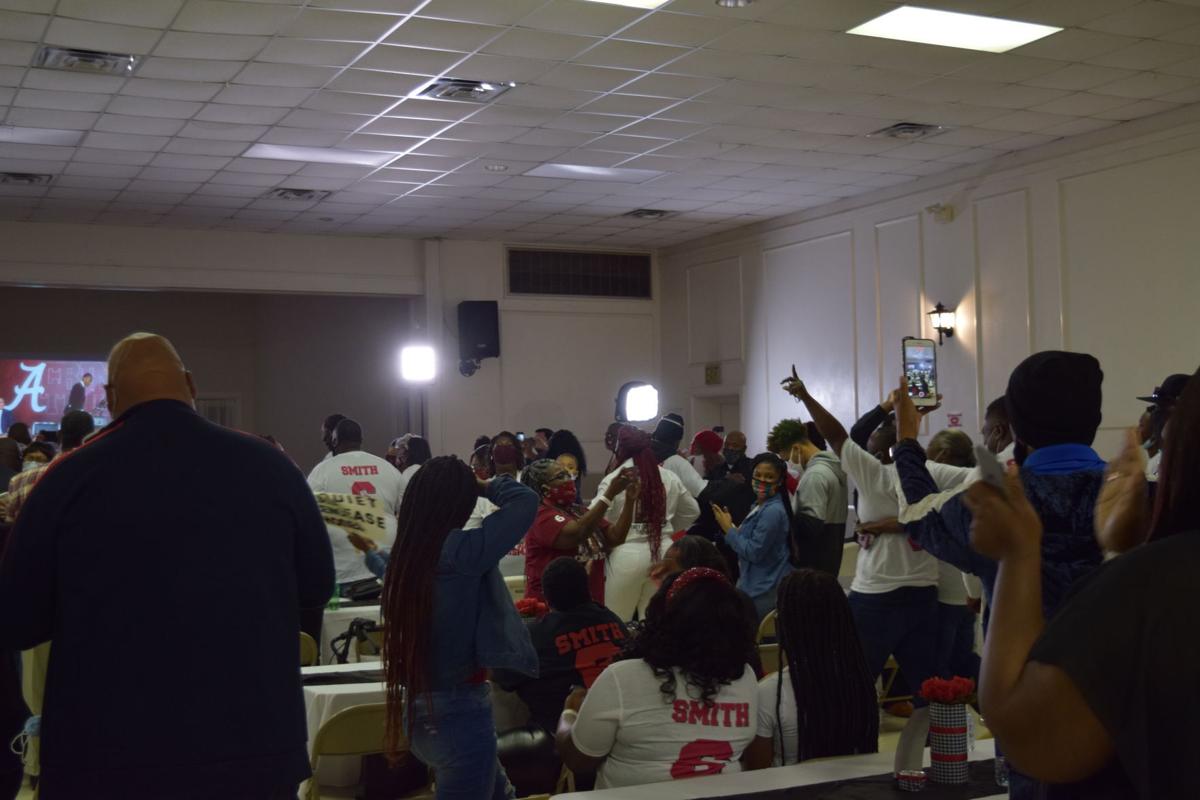 The crowd at the Amite Community Center cheers the moment DeVonta Smith is named the 2021 Heisman Trophy recipient.

Proud Amite residents gaze at a projection of the ESPN broadcast when DeVonta Smith’s biography is featured on Tuesday night. Smith is the first wide receiver to earn the award since 1991.

HELPING – Friends and family who organized the invitation-only Heisman watch party volunteer to help ESPN’s television crew by holding a sign, telling the audience to silence their phone and stay quiet during the broadcast.

The crowd at the Amite Community Center cheers the moment DeVonta Smith is named the 2021 Heisman Trophy recipient.

If you ask outsiders what they know about Amite City, Louisiana, they might be able to say it is the hometown of Gov. John Bel Edwards and the fried chicken from Miss Ann’s is legendary. Now the town is known as the place where Heisman Trophy winner DeVonta Smith was born and raised.

While the former Amite Warrior and current Alabama star wide receiver participated in the ceremony on ESPN in a remote location with Crimson Tide Coach Nick Saban, around 130 of Smith’s friends and family waited eagerly inside of the Amite Community Center on West Chestnut Street for the invite-only closed television circuit event.

The air was thick with tension as people, all wearing masks to protect against COVID-19, sat at tables for six.

Some friends and family volunteered to help ESPN’s camera crew by holding up signs for the audience that instructed to turn off all cellphones and to remain quiet as the broadcast was being produced.

The room was completely quiet and the audience watched anxiously before Amite’s native son was officially accepted into the historic brotherhood of the Heisman Trophy. That nerve-wracking moment felt like it would be lighting a match with a stream of gas if DeVonta’s name was announced.

All around the room were familiar faces. Councilman Kris Hart was there, and along the walls of the room prominent television broadcasters were positioned to be among the first to capture the excitement that was about to let loose for their nightly broadcasts.

For stretches of time, the audience was allowed to watch the broadcast. Former Heisman winners on ESPN made their predictions and their favorites to win the trophy. Tim Brown, 1988 Heisman-winner, expressed on the broadcast his wish to see Smith bring the hardware to Amite because Smith is a wide receiver as he was.

Desmond Howard, the last receiver to win the award in 1991, also expressed his wish to see Smith be named the best player in college football.

With their phones on silent, the audience waited as each candidate and their biography was presented in alphabetical order. It was Alabama quarterback Mac Jones followed by Clemson quarterback Trevor Lawrence. Smith’s feature appeared before Kyle Trask’s, quarterback of Florida.

When Smith’s biography was first on the screen, the television crews had the volume down.

“Turn it up!” several in the audience pleaded.

When the audio was established, the crowd was treated to commentators saying that Smith plays remarkable for his size, noting he jumped up from 150 pounds to 175 pounds during his time at Alabama.

When one commentator called him the “slim reaper,” the audience let out a chuckle. The unassuming kid becoming a nightmare for the opponent was something they had seen since his days at Westside Middle.

The crowd continued to react as ESPN showed video highlights of him catching balls as a Warrior and dunking in a basketball game against St. Thomas Aquinas.

The moment of truth was arriving, and Amite City was about bear witness to the biggest moment in Tangipahoa Parish sports history.

In the back of the hall, Smith’s high school coach, Zephaniah Powell, had been sitting and waiting patiently with Eric Jackson, a former wide receiver for Amite and Southeastern, who often volunteers to help coach and develop players for Warriors football.

When the announcement was finally made, the room erupted in a rush of sounds expressing love for the small town kid who achieved the biggest of dreams. Powell joyfully cheered, “Hell, yeah!”

“I can’t wait to see him in those Heisman House commercials!” Powell said, laughing. “I’m speechless, my dude. Congratulations once again!”

Jackson and Powell noted the surrealness of the event and cried tears of joy that their special athlete received the historic distinction partly as a product of their programs.

At the end of the biography, the broadcast turned to the community center and it was Amite’s time to shine on national television. The crowd cheered for ESPN and their enthusiasm made an impression on the broadcasters.

Smith’s parents, his father Kelvin Dickerson and mother Cynthia Smith-Sylve, gracefully spoke about their son on the broadcast while beaming with pride while friends and family showed their support behind them.

The town’s most notable name took note of the historic moment and Gov. John Bel Edwards gave his congratulatory message on social media.

An emotional Smith gave an inspiring message on the broadcast.